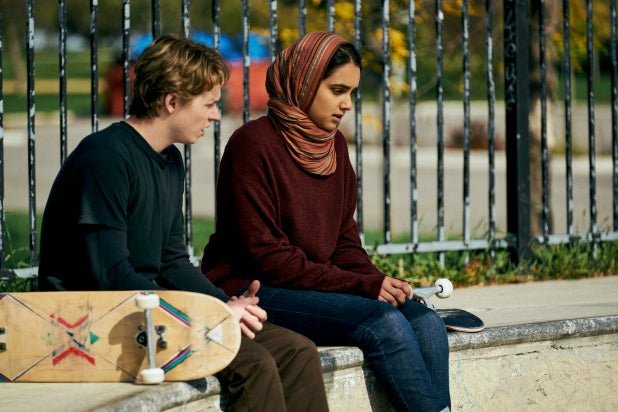 For every generation, there are one or two coming-of-age films that encompass what it means to be a teenager of that particular era. The ’80s had John Hughes, whereas the ’90s offered “Clueless,” “10 Things I Hate About You,” “Empire Records,” and “Now and Then,” among many others.

While this is a genre that includes plenty of titles, it’s still rare that a coming-of-age film focuses on a young woman of color, particularly one who is also a child of immigrants. Writer-director Minhal Baig brings this very specific narrative to life with tenderness and care in “Hala.”

She heads down for breakfast, where she jokes and works on a crossword puzzle with her dad, Zahid (Azad Khan), as her stay-at-home mom bemoans Hala’s absence from morning prayer and chastises Zahid for getting Hala involved in the crossword and buying her a skateboard. Within these first few minutes, Baig establishes the in-between world Hala inhabits, caught between her father and his comfort with Westernized culture and her mother, who doesn’t speak English, focusing on the needs of her husband and daughter as proscribed by traditional Pakistani culture.

At school, Hala can be more herself, giggling with her friends, crushing on blond-haired, blue-eyed classmate Jesse (Jack Kilmer, “Lords of Chaos”), and reading aloud from her journal in her favorite class before heading to the skate park. After skateboarding, she heads back home, to her mother’s watchful eye and some unspoken tension between her parents. The unease appears to come from Zahid’s more relaxed view of his daughter’s American hobbies while Eram fusses about Hala, especially when someone from their community calls to let her know she has been seen at the skate park where there are boys. Soon, Hala uncovers the real cause of friction between her parents, which forces her to question what she knows and what she wants.

From the opening sequence to the very last frame, you can feel Baig’s love for Hala. At times it’s motherly and protective, at others reflective, but the director always seems to be giving her actress total control of the character. Viswanathan’s resounding, yet quiet performance allows the audience to see Hala for who she is — a smart, funny, intelligent, angsty, confused, and completely normal teenage girl. Even when Hala starts to act out of character, it’s Viswanathan’s charisma that keeps the audience connected and wanting to be there for Hala, regardless of what they may think about the choices she’s making.

While the lead performance and direction are full of life, the cinematography by Carolina Costa comes off a bit dull by comparison. There’s an excess of dark and shadows, which reads as far too unimaginative and over-literal. The film also relies too much on speech and performance to highlight cultural differences, when a little focus on set pieces could get across the same points.

Baig doesn’t shy away from the qualms of an adolescent woman. There’s boys, and sex, but that’s not really the focus; I especially noticed a particular scene between Hala and her mother, where they are shopping — Eram insists on Hala trying on yet another figureless, long-sleeved, button-up shirt, while Hala eyes a sleeveless, wine-colored, form-fitting top with envious yearning. Her mother immediately cuts off any thought of ever purchasing such an item.

It’s clear that their culture will forbid Hala from wearing it, and yet there’s a universal quality in that moment that many women will connect with when remembering their own teenage years. It’s that complicated time where mothers are desperately trying to stay connected to their daughters, just as the daughters start to have their own tastes, wants, and opinions on how they want to be seen.

Watching that sequence, I immediately flashed to my own teenhood, where I so desperately wanted to wear smokey eyes and wine-colored lipstick, only to have my mother purchase a hideous (but expensive) light pink lipstick that was “appropriate for a young lady” from a department store. She thought I would be happy, and then we argued when it sat on my dresser, completely unused. Now, as the mother of a teen girl myself, these are the scenes that hit me the hardest because they are the most real, and the ones that repeat themselves, generation after generation.