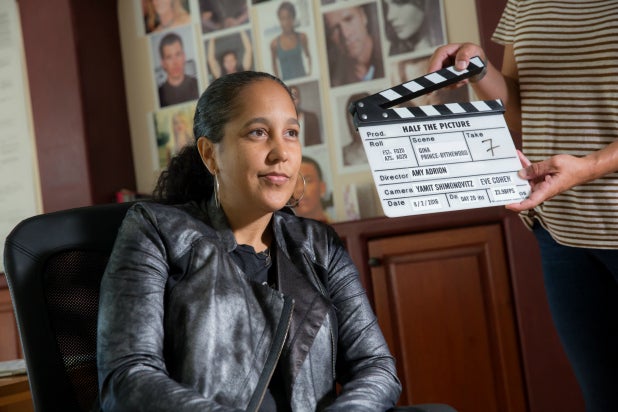 In director Amy Adrion’s documentary “Half the Picture,” LA Times journalist Rebecca Keegan shakes her head as she states on camera that she has written the same article about the lack of gender parity in Hollywood at least nine or ten times.

Keegan is quietly incredulous, and if you’ve been paying attention to the ways in which the industry shuts out women creators, you likely feel similarly tired as Keegan is about pushing this question: Why are so many films still directed by straight, white men?

“Half the Picture,” then — for the tired among us — seems on the surface like a pill we really don’t need to swallow. (How many other ways can it be said that things aren’t fair?) But Adrion’s selection of interview subjects make the issue personal. They demonstrate through storytelling not just this rote message we’ve heard before but also the catastrophic domino effect sex discrimination has had on careers, even the careers of seemingly powerful women like Ava DuVernay and Miranda July.

July relays her story of a film class she took at UC Santa Cruz, where she was the only woman and eventually dropped out after never seeing eye-to-eye with her male peers and instructor. For her, it was a long road of self-discovery, where she built her own community via the female film anthology series “Joanie 4 Jackie” in the era of zines and DIY.

Every filmmaker interviewed gives a specific reason for why things are so dismal for women directors, which also potentially provides an opening for people in the industry to look at the ways in which it’s failing and to restructure, rather than hiding behind the problem’s systemic nature and throwing up its hands, as if to say “I guess things will always be terrible!”

Adrion also attacks all the myths: In one segment, Sundance festival programmer Caroline Libresco states that a survey among female filmmakers proved that at least 50 percent of them would love to make a genre film, debunking the insinuation that women are too delicate for action or horror. How anyone would think that no women would have interest in media that’s been dominating the culture — through superhero films, crime dramas and other blockbusters — is ludicrous anyway, but it’s one of multiple messages that just needs to be said and moved on from, so it’s nice that Adrion doesn’t linger too long on this obvious section.

Even though so much of what this film has to say is so ingrained in me already, I still found myself being surprised, like in another section where Adrion shares gossip items about the subjects’ work to get their comments on it. The gossip focused specifically on rumors that the director couldn’t handle the job, giving credit to their collaborators for a film’s success. Conversely, when a film bombed, the gossip blamed the women directors for being too inexperienced, too demanding, etc.

When Adrion reads to Catherine Hardwicke that the DP of “Twilight” was responsible for the film’s “sumptuous look” and that the editor had to “save the film,” Hardwicke appears genuinely shocked and hurt. As she states, it was she who was there, bringing together crew and guiding them to her vision. The film could have lingered on that reaction for more emotional resonance, but Adrion’s got a lot of ground to cover, and some of that ground covers Adrion herself.

Adrion doesn’t insert her own voice into the story until she cites that gossip, but her presence escalates slowly and artfully as the film goes on, with the director incrementally shifting the focus from the interview subjects themselves to the interview subjects’ relationship to the crew shooting this very documentary.

At almost the exact halfway point in the film, during an interview with Jill Soloway, Adrion tosses in a wide shot; we see Soloway in her chair, but also the lights, mics, cords, camera, and a micro-crew, which is conspicuously heavy on women. That first invasion behind the scenes is only a single shot, but we gradually see that crew more and more, and the result is that I found myself thinking about what it means to actually see a woman directing or a woman running camera.

It’s difficult not to get emotional about the subject matter of this film or the ways in which women have been thwarted time and again; one of the most infuriating moments was Latina director Patricia Riggen sharing that her producers arranged the shooting schedule of “The 33” to accommodate the white male assistant director, whose footage turned out to be completely unusable. “Half the Picture” is maddening and enlightening and, most of all, necessary, as much as I wish it weren’t.