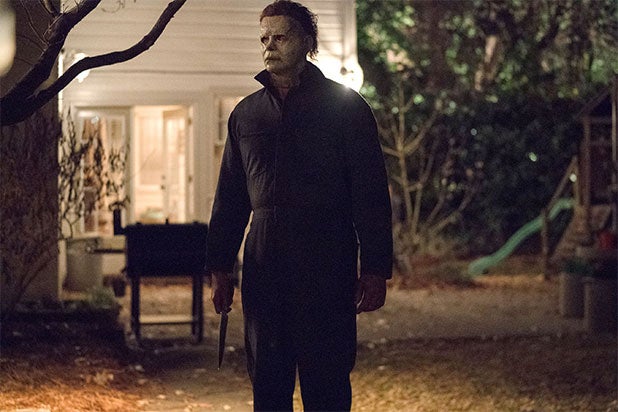 It’s been 40 years, several awful sequels, multiple reboots, a non sequitur spinoff and countless imitations since John Carpenter’s “Halloween” first stabbed the screen in 1978. To say that the brand has been diluted a little bit would be an exercise in understatement. Everyone knows serial killer Michael Myers, but everyone also knows he just hasn’t been himself in a while.

So it makes sense, in this nostalgia-driven era, to go back to the basics. Blumhouse has taken over the “Halloween” franchise, and they’ve enlisted celebrated director David Gordon Green (“Stronger”) to return Myers to his former glory. The new “Halloween,” which is confusingly and frustratingly titled just “Halloween,” ignores all of the failed follow-ups to the original slasher classic.

It also ignores all the good ones, because the bathwater was so apparently bad they decided to toss the baby out too. Green’s “Halloween” is a direct follow-up to Carpenter’s original, and tells the story of Laurie Strode (Jamie Lee Curtis), who survived the original massacre and spent decades in a state of post-traumatic stress, mentally preparing herself for the return of Michael Myers and becoming increasingly estranged from her only child, who rejects her paranoia and refuses to live in fear.

Watch Video: Michael Myers Is Back to Kill in New 'Halloween' Trailer

It’s a storyline that the new “Halloween” can only get away with by completely ignoring the fact that it’s been told before, and very well, in “Halloween H20.” Then again, slasher franchises are built on familiarity, if not outright repetition. Green’s sequel adopts the eerie cinematic style of John Carpenter’s original “Halloween” while evoking what is, perhaps, the only truly great “Halloween” sequel that came before it. And although it falls into several pitfalls of the genre, it’s still an effective chiller.

“Halloween” (2018) kicks off at Smith’s Grove, the mental institution where Myers has been institutionalized for four decades, after the unthinkable horrors of his killing spree in 1978. It is here that two podcasters arrive to give endless exposition, clearly state the movie’s themes, and poke the hornet’s nest. They brandish Michael’s original mask like it’s some kind of religious idol and yell “You feel it, don’t you Michael?! YOU FEEL THE MASK!” as if that’s somehow, in any universe, a good idea.

Meanwhile, Laurie Strode lives in an elaborate doomsday compound on the outskirts of Haddonfield. She spends her time cleaning her arsenal of guns and taking potshots at her impressive collection of mannequins, which are all white, emotionless statues like Michael Myers. Laurie’s daughter, Karen (Judy Greer), doesn’t talk to her. Karen spent her childhood preparing to kill Michael Myers, much in the same way John Connor spent his childhood preparing for the robot apocalypse in the “Terminator” movie universe.

Now, Karen has completely rejected her mother’s warnings, and has raised her own daughter, Allyson (Andi Matichak), with the philosophy that there’s actually some hope for the future, beyond an inevitable confrontation with a knife-wielding maniac. The film’s most genuine, tragic moment comes when all three generations of the Strodes are having dinner together, with Laurie in the midst of a debilitating panic attack. To Karen, it’s just another in a lifetime of avoidable anxieties, the cause of all her own pain. To Allyson, it’s a heartbreaking moment of fragility that brings her closer to her grandmother.

But “Halloween” can’t just be a sensitive drama about the ripple effects of tragedy. At some point, Michael Myers has to escape and go on another epic killing spree. He’s apparently been working out this whole time, because he beats the living hell out of several healthy young victims with his bare hands. He also stabs, impales and gets weirdly fixated on teeth for some reason. This version of Michael missed out on 40 years of murder spree sequels, and he has a lot of catching up to do.

Also Read: Jamie Lee Curtis Fires Back at Fox News After Accusation of Being Hypocritical on Gun Control

Director of photography Michael Simmonds (“Nerve”) has a glorious time recreating the gliding, ghostly camerawork of the original “Halloween,” while giving the film a sharp, inky contrast that makes Myers look creepier than ever before. The script provides multiple opportunities for visually dynamic scare sequences, including a clever gag with a motion detector light, but the centerpiece is an early slashing bonanza of which Carpenter (credited here as executive producer) would no doubt be proud.

Myers practically floats through the busy streets of Haddonfield, completely hidden in plain sight, taking out his murderous aggressions on unsuspecting house-dwellers while the costumed children are none the wiser outside. It’s simple in its conception, complex in its execution, and terrifyingly believable. For a moment, Green’s “Halloween” is arguably scarier than the original.

But despite the glorious style and the disturbing kills, the new “Halloween” is still a slasher sequel, and it falls prey to all the same old slasher sequel problems. The plot is hopelessly contrived and bends over backwards until its back breaks, just to justify its coincidences. The disposability of the teenaged supporting cast is only thinly disguised by off-putting, meaningless details. (One of the teens wears a lot of chapstick. That’s it. That’s the only thing that makes him stand out as a character.)

And of course, no slasher movie would be complete without a moment in which the young hero’s cell phone is neutralized. In this case it’s dropped in what looks like a bowl of cheese. Rather than pick it up and take it with her — if only to retrieve the SIM card — Allyson just leaves it there, because apparently phones grow on trees and she doesn’t care if anybody finds it and steals her identity. You know, like a person would.

A forgettable supporting cast and a handful of forced plot points do not ruin a horror sequel. Forget the promise of Blumhouse taking over the franchise and giving it to a respectable director like David Gordon Green: This isn’t a glorious rebirth, it’s a functional facsimile, and it’s a wholly satisfying piece of slasher entertainment regardless. Green’s film takes the material seriously, for the most part, but he’s still trapped in a world of coincidence and foregone conclusions. Myers must escape and Laurie must face him, and the universe will stop at nothing to make that happen, even if the explanation for their dramatic reunion is hilariously laughable and ultimately unnecessary.

The most frustrating element of Green’s “Halloween” is that despite its wry dialogue and celebration of Laurie Strode, it’s a deeply cynical motion picture. Laurie is a Cassandra figure, who has been warning Haddonfield of Myers’ return for so long that nobody believes her. Laurie’s daughter, Karen, has been prepared to defend herself physically from Myers, but to her way of thinking, even more damage has been done by Laurie. Karen had to reject Laurie’s worldview in order to build up her own positive outlook and live a life worth living. She’s so eager to overcome her anxieties about Halloween that, on October 31, she’s already wearing her Christmas sweater.

It’s wrong to deny Laurie Strode her right to have defense mechanisms, but it’s disturbing to build an entire narrative around justifying her emotional child abuse. Laurie spent a lifetime telling her daughter to live in a state of constant terror, and the movie essentially argues that she was right to do so, because Laurie was right about Myers’ return. It’s painful to watch a traumatized child yell at her mother to please, please acknowledge that there is love and goodness in the world, and it’s enormously off-putting that the movie she’s in takes the opposing side, arguing that optimism is little more than dangerous naïveté, and that only Laurie’s doomsaying could save any lives.

There are monsters in the world. Look at the news; there are boogeymen. But if the boogeymen matter above all things, what’s the point? Michael Myers is no longer an aberration, an injection of terror into another otherwise functioning world. He’s a gross inevitability, something we have to simply accept as part of our lives. We can fight him. We can defeat him. But we can never hope to escape him. By the end of Carpenter’s “Halloween” that possibility was horrifying. By the end of Green’s, the certainty is depressing.