All the mazes at Universal Studios’ Halloween Horror Nights follow the same basic idea: You walk through rooms and hallways, and people in costumes try to scare you.

It works. If you, like me, love a good professional scare, you’ll be hard-pressed to find a better one than you get at Halloween Horror Nights.

Thanks to several decades of spooky intellectual property, from “Ghostbusters” to “Us” to “Stranger Things” to Rob Zombie’s “House of 1,000 Corpses” to Universal icons Frankenstein and the Wolfman, the mazes that dominate Universal Studios around Halloween are meticulously, beautifully calibrated to mess with your mind. You can walk into a new dark space and try to guess, Clarice Starling style, what corner the next creepy character will pop out of, but you’ll usually guess wrong.

My wife and I visited all 10 of the Halloween Horror Nights mazes on a recent Friday night. We had the benefit of Universal Express passes furnished by the park so that we could review as many mazes as possible with minimal lines.

In fact, the frights start before you even enter a maze. The park’s pathways are packed with performers who use stilts, chainsaws, and every manner of tool to make you think they’re about to kill you. Not one of the dozens of performers we encountered landed a single fingertip on us, but they came close. The level of coordination was impressive. As the night goes on, the performers get more in your face. It’s a slow burn that starts ominously at sunset and soon devolves into gleeful chaos.

It’s hard to say which maze is the most frightening, because some of them enlist the same tricks, none of which I’ll reveal here, and they tend to be most effective the first time they’re sprung on you. When a certain thing happened to us in the excellent neon-tinged maze “The Curse of Pandora’s Box, we were truly shaken. We were less scared when it happened again in the sublimely scary “Frankenstein Meets the Wolf Man” and the grotesquely wonderful “Killer Klowns From Outer Space.”

All that said, here are some ratings of the 10 different mazes, rated 1-10, in the order we did them. We enjoyed every one of them, but some more than others. 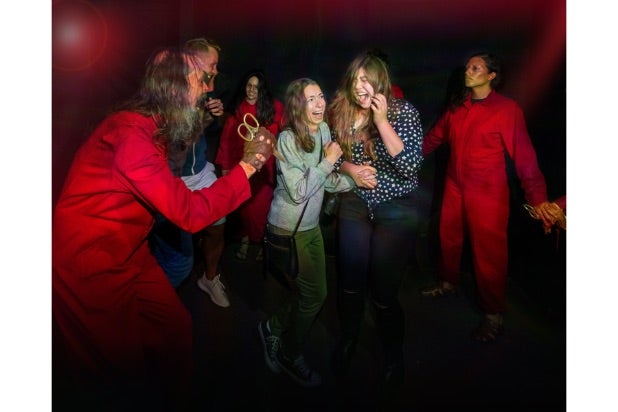 This is the maze we most anticipated, and it will delight anyone (like me) who really liked Jordan Peele’s doppelgänger horror movie. I’d hoped Universal would figure out how to make tethered versions of every single guest, but that’s probably not a reasonable ask. That said, this maze is filled with thoughtful detail, down to the behavior of cast members who are very passable stand-ins for the characters in the film.

One of the best parts of Halloween mazes and all haunted attractions is the creepy sense that maybe, just maybe, one of the performers is going to pick tonight to lose his mind and actually grab you. Or that a legit demon thought it would be funny to camouflage himself among all the fake monsters.

This irrational fear works very much in favor of middle-of-nowhere haunted hayrides, but not as well in a corporate theme park using highly profitable IP. You never feel like you’re in actual danger during the “Us” maze, which makes it less scary. Though you will marvel at the set design and committed acting. It’s an 8 out of 10. 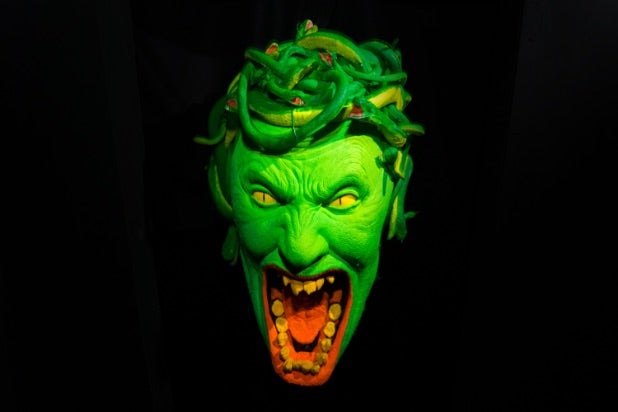 “The Curse of Pandora’s Box”

Located near “Us,” this maze is loosely based on Greek mythology and is absolutely terrifying. There’s no protective cloak of safe IP, so you don’t know what to expect. It’s beautiful and mesmerizing, and the jump scares will make you very jumpy. I was very eager for it to end, which is the highest compliment one can pay to a haunted maze. 9 out of 10. 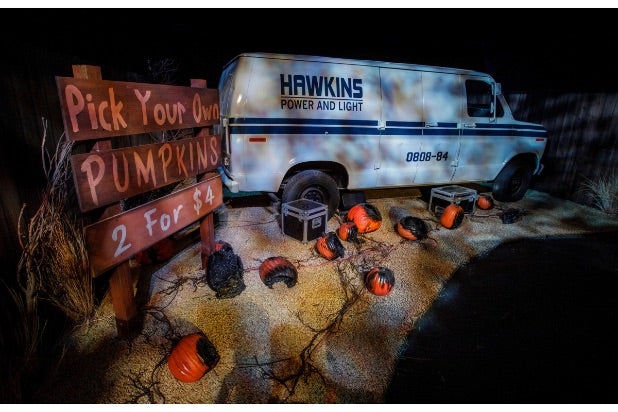 This one doesn’t quite capture the Atari-era vibe of the beloved Netflix series, but it does deserve credit for offering not just nostalgia-tinged tingles, but also something of a narrative. The “Stranger Things” maze tells the story of the corruption of poor Hawkins, Indiana. It’s more gross than frightening, which adds variety to the overall Halloween Horror Nights experience. But we came here to be terrified. 7 out of 10. 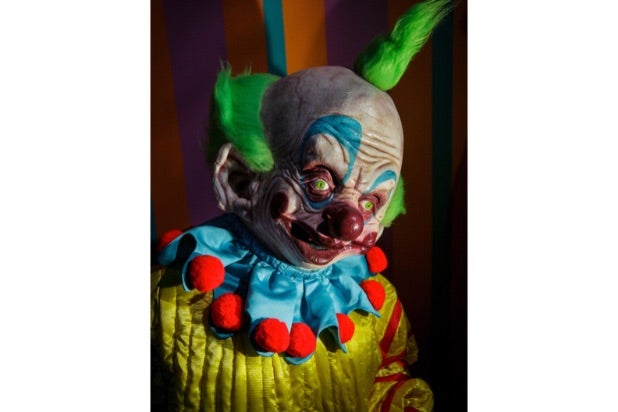 This is where I lose any hope of cult-movie credibility and admit I’d never seen “Killer Klowns From Outer Space,” a very 1988 campy horror comedy, prior to walking through its maze at Halloween Horror Nights. My ignorance turned out to be a huge advantage, because I was unprepared the ghastly majesty of the oversized klowns who attacked from every turn. This one was everything a scary maze should be — it manages to be deeply jarring even in bright lighting. 10 out of 10. 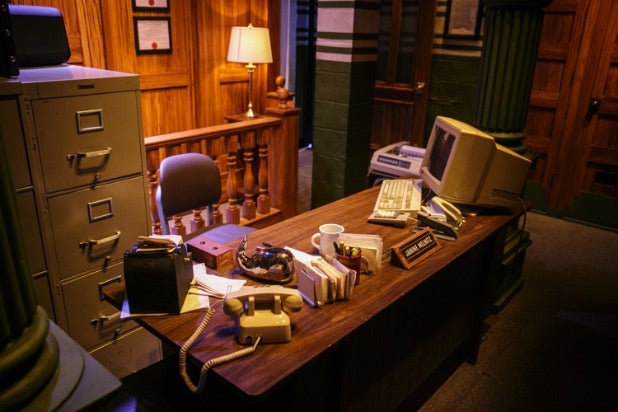 If you loved the original “Ghostbusters” (spoiler: you did), you’ll have a very pleasant time in this maze. It isn’t really scary at all, but it perfectly captures the shambolic charm of ’80s New York City, as seen in the 1984 horror-comedy. Eighties kids, tell me the file cabinet above doesn’t move you. 8 out of 10. 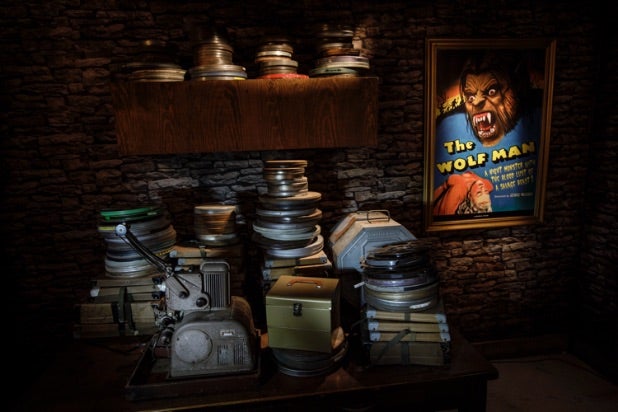 This might sound like a maze for kids. It isn’t: There’s a gothic, crumbling Old Europe vibe to this classic horror throwback, directly inspired by the 1943 Universal release of the same name. The Wolfman and Frankenstein make many appearances, and unlike the creatures that pop out to frighten you in other mazes, both monsters seem tragic. You don’t want them to grab you, but you don’t want to chase them off with torches, either. This maze has a compelling mix of shivers and sorrow, and a freakish sense of nostalgia for possibilities lost. 10 out of 10. 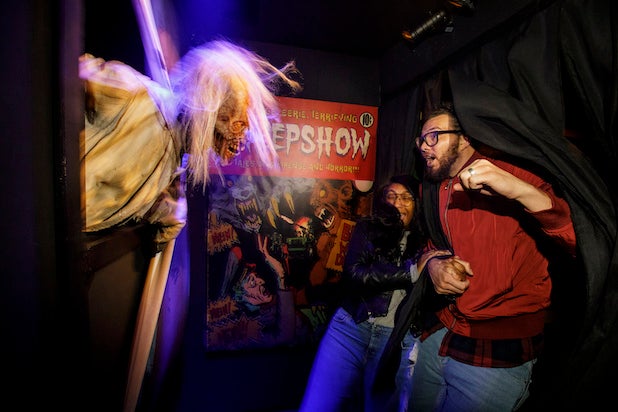 This one celebrates the dirty rebellion of cheap thrills. It’s one of several mazes that makes great use of dialogue — in this case, a tirade from a cruel father threatening to beat his child for reading pulpy horror comics. The mix of fake horror (skeletons!) and real horror (bad parenting!) lingers long after you escape the maze. 9 out of 10. 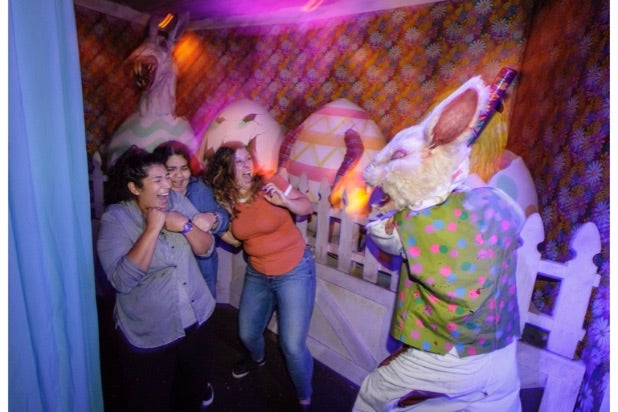 Like “Pandora’s Box,” this is an IP-free original maze, and is ruthlessly, pull-out-all-the-stops shocking. (One of the first things you see is a baby skeleton.) This is another maze with a clear narrative: It takes us through holidays we never considered scary before, a bit like Eli Roth’s “Thanksgiving” trailer. It also shares some of the grisly nastiness of that trailer — things get very ugly, and scaring you is the whole game. Like “Pandora’s Box,” this one benefits, scares-wise, from not having the protective sheen of corporate IP. But at times it’s more gross than scary: It may actually have been too much for me. 8 out of 10. 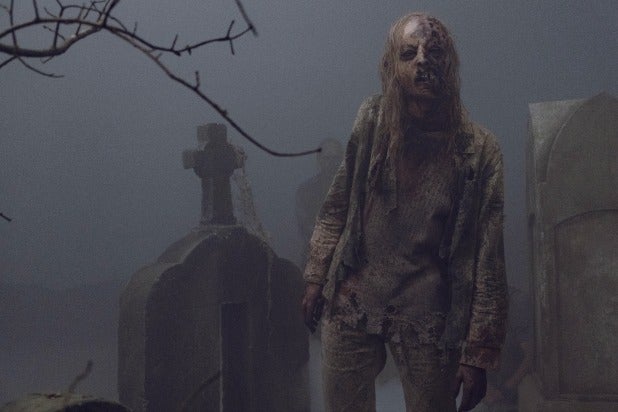 This one is also a daytime attraction, and while the set design is impressive, it feels more like immersive theater than a horror maze. The walkers mostly leave you alone, giving you time to take in the thoughtful sets, which feel straight out of the long-running AMC series. But zombies should be scarier than this. 7 out of 10. (Note: The photo above is from the show, not the maze.) 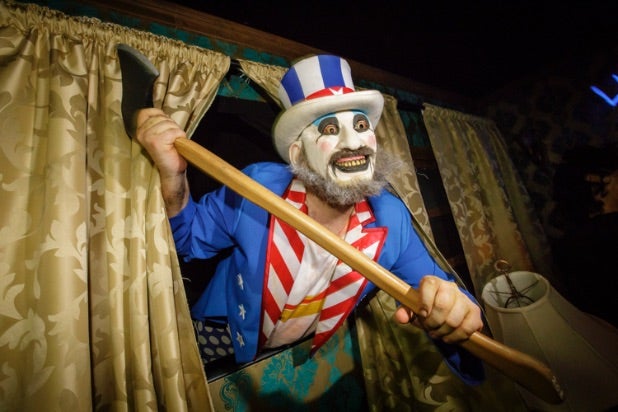 We scared the freakiest for last. This is another take-no-prisoners, truly disturbing experience, with lots of bloodshed and depraved cruelty and hideous people being hideous. It’s a carnival of creepy, featuring a museum of monsters and madmen, a demented surgeon named Dr. Satan, and the Firefly clan of killers. This is a great ending to Halloween Horror Nights, because no other maze matches it in terms of horror. Bonus points for the Sid Haig homage. 10 out of 10.