Showtime and sister streaming service Paramount+ pulled off what both hope is well-executed trade that would make any NFL general manager jealous when the pay cable network sent its long-in-the-works adaptation of “Halo” over to Paramount+ and took “The Man Who Fell to Earth” back in return.

“We started developing ‘Halo’ seven years ago, when there was no Paramount+, or even a glimmer of an idea. And it was always a bit of an odd fit. What is Showtime doing making a first-person shooter video game and putting it in their dramas?” Levine said. “But when Paramount+ emerged, it just seemed like it was a better fit for all of us. I think this is a one-time thing and we did a one-time trade: You can have ‘Halo’ and we’ll take ‘Man Who Fell to Earth.’ You’re happy, we’re happy.” 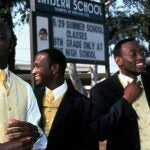 In late February, “Halo” moved over to Paramount+ and three weeks later, Showtime announced that “The Man Who Fell to Earth” was moving from Paramount+ to Showtime.

The adaptation of the popular Xbox video game, which stars Pablo Schrieber, is set to premiere in early 2022. Other cast members starring in “Halo” include Shabana Azmi, Bentley Kalu, Natasha Culzac, Kate Kennedy and Yerin Ha.

Kyle Killen, the original showrunner on the Paramount+ “Halo” adaptation, has exited the upcoming streaming series. His fellow co-showrunner, Steven Kane, will remain with the show through Season 1 post-production. That’s the good news. The bad news: should “Halo” get renewed for a second season, Kane will not return.

“The Man Who Fell to Earth” will star Chiwetel Ejiofor and Naomi Harris.

The series is based on Walter Tevis’ 1963 novel, which was adapted for a 1973 film that starred David Bowie. “The Man Who Fell to Earth” follows an alien who arrives on Earth at a turning point in human evolution and must confront his own past to determine our future.

In the first adaptation, Bowie starred as the alien Thomas Jerome Newton in the Nicolas Roeg-directed film; it was Bowie’s first starring film role. Ejiofor will play a different alien than the one Bowie played in the original film.