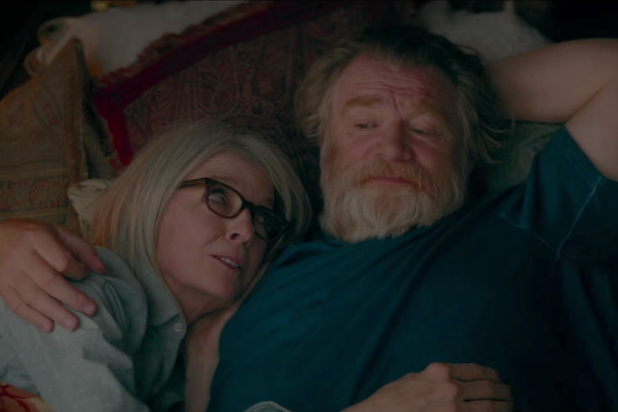 Calling a film “Hampstead” invites immediate comparisons with “Notting Hill,” the Richard Curtis-penned rom-com that put that particular West London enclave on the global map back in 1999.

Director Joel Hopkins may be hoping for similar success, although I doubt the fine residents of Hampstead itself are looking forward to an influx of foreign tourists along their leafy and quaint streets.

In any case, the area of north London’s Hampstead on which this film focuses is the Heath, a great expanse of wood and wild park land that immediately features in the movie’s twinkling opening sequence, following a child’s kite as it flies across the Heath’s famous views of the city skyline, floating above picnicking families, striding dog walkers, pert joggers and recumbent lovers. It’s a shot, I suppose, intended to rival Hugh Grant’s “walk through the seasons” along Portobello Market in “Notting Hill.” (Perhaps intentionally, the two films even share one particular location, that of Georgian gem Kenwood House).

Also Read: Women in Animated Films Make Up Only 17% of Lead Characters

Hopkins, who grew up around the Heath, knows the place well and is intimate with the houses, the pretty pubs, and even the restaurants. The film looks and feels right, perhaps more so than the rather touristy look he gave his earlier London film, 2009’s “Last Chance Harvey,” which also featured a UK/USA romance, as Dustin Hoffman fell for Emma Thompson.

This time, the American is Diane Keaton, playing once-wealthy housewife and long-time Hampstead resident Emily, now a widow still shocked at her banker husband’s recent demise and still dealing, badly, with his debts. Fiona (Lesley Manville), her uptight neighbor in their smart, converted apartment building, fixes her up with an oily accountant (played by British cinema’s current go-to creepy guy, Jason Watkins, “Taboo”), who offers to sort out Emily’s money problems with “no strings attached.”

Sifting through her possessions in the attic one lonely night, Emily finds her dead husband’s old binoculars and, through them, scans the Heath across the road. She spies a big man (Brendan Gleeson) washing himself in one of the ponds, like Baloo the bear. She watches as he lopes back to a shack, a kind of hut nestled away in the woods and undergrowth.

A few days later, Emily stumbles across the man resting by Karl Marx’s grave in Highgate Cemetery (technically a bit of a walk from the Heath, but it’s do-able) and, after he introduces himself gruffly as Donald, they begin an unlikely friendship, fuelled by Emily learning that Donald faces eviction from his shack by greedy developers keen to build luxury flats in the grounds of the old hospital in which his abode stands.

Their friendship turns to dinner at his place (on the menu is fish, illegally caught in the pond, and home-grown vegetables, washed down with homemade wine) and pretty quickly Emily is literally shacked up with Donald, who’s proud of his fragrance of “patchouli and pond scum.”

To say this is old-fashioned cinema is slightly off — it’s cinema fashioned for the old, precision-tooled for the mid-week demographic. Keaton is actually better than I’ve seen for ages, summoning up a real vulnerability to go with her usual smarts. She goes full Keaton on the outfits, too, rustling up a succession of tweedy jackets, polka-dot scarves, collared shirts and slacks, topped with a grey wool beret. Gleason mainly wears a T-shirt, although he does accessorize with a wooden staff and occasional hat, which lends him a hint of Gandalf.

“Hampstead” plays along with the contrasts lightly. Emily’s attraction to Donald’s alternative lifestyle teaches her some life lessons (mainly: beware sniveling accountants and don’t trust rich neighbors) while Donald remains wary of reality, particularly when he becomes a reluctant local cause celèbre and ends up fighting a court case.

There are few big laughs here, as Hopkins instead relies heavily on charm, which his performers have more of than these relatively sketchy characters. Neither is there much actual drama, at least until the court scenes, which frankly feel like they belong to another movie. Yet there is a kind of blessed relief to be had in this summery cinematic amble, handsomely shot by upcoming cinematographer Felix Wiedeman (“Mr. Selfridge”) and gently scored by Stephen Warbeck (“Shakespeare in Love”) as if capturing birdsong.

Indeed, one can’t be sure what Hopkins is getting at. Despite suggesting it might be heading that way, the film never quite provides a commentary on insane property prices, heritage, conservation or any of London’s other pressing housing issues. We admire Donald’s eccentricity yet never get behind the strange story of how he comes to be living here, undetected for so long. We are probably meant to envy his self-sufficiency in the modern city, and the film is, finally, dedicated to the real-life figure of Henry Hallowes, who really did live in a shack on the Heath, and who, according to this film, “lived the way he wanted.”

“Hampstead” the movie, however, tries to tie things up too neatly and stumbles a bit as it goes, like a walker on the Heath in the wrong shoes. But Keaton’s terrific, and it’s sweet and airy and so unhurried you really feel like you’ve had a nice afternoon in the long grasses and cool breezes on the edge of the city. You wouldn’t want to live there, though.