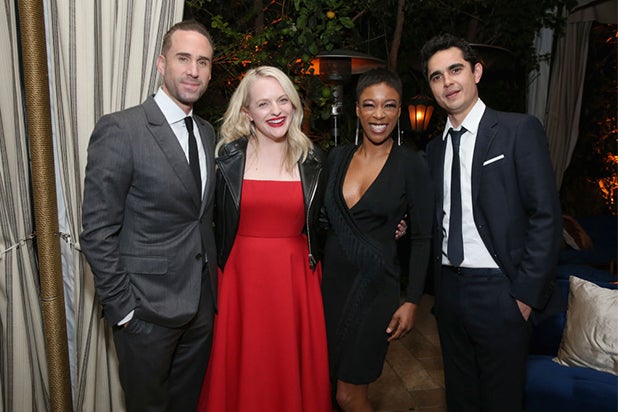 Note: This Party Report does not contain any spoilers of “The Handmaid’s Tale” Season 2. If you haven’t yet seen season one, beware.

When we last saw Elisabeth Moss’ Offred in the final shot of “The Handmaid’s Tale” Season 1, she was loading herself into a prisoner transport van, as the opening riffs of Tom Petty’s “American Girl” swelled and the door slammed shut.

Since that season finale last June, the show, its stars and producers have won eight Emmys (beating Netflix and Amazon to the finish line as the first streaming service to win the top prize, “Drama Series”), two Golden Globes, three Critics Choice awards, guild awards from the DGA, PGA and WGA, and AFI recognition as one of the 10 creative achievements of 2017. 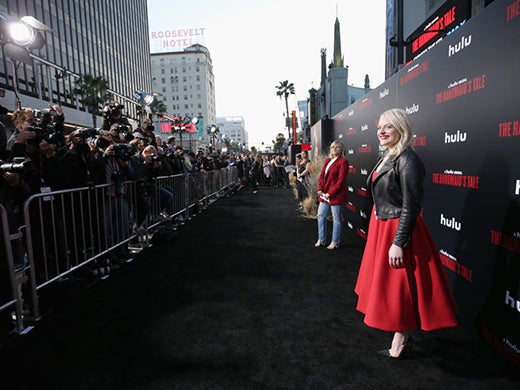 In pop culture, the Handmaids’ cranberry robes and white wings surged up the Halloween costume charts.

Returning as a transcendent cultural phenomenon, Hulu’s flagship series delivered a proportionately muscular Hollywood Boulevard premiere and after party the Chateau Marmont on Thursday night. Despite the celebratory mood and, without spoiling the story to come, be assured that the content on screen is horrifying and gets there quickly. At least star and producer Elisabeth Moss warmed up the crowd with a moment of levity and song at the start. 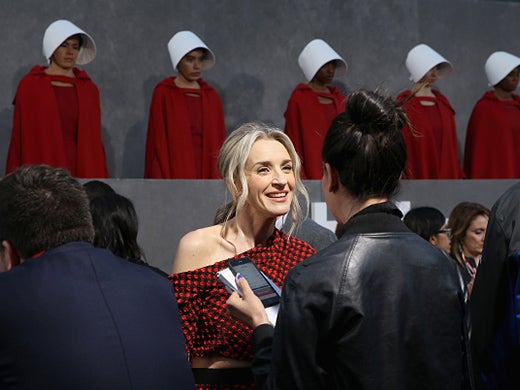 More on that and six more moments seen and heard at the “Handmaid’s” bash.

Hulu beat its streaming rivals to the Emmy podium for the Best Drama series prize, and now it beats them on the party circuit.

“Handmaids” took over the TCL Chinese Theatre, the first streaming service to step into feature film’s splashiest premiere footprint. It’s a rarity for any TV show to spend this big. HBO previously rented out the block for a “Game of Thrones” season premiere and also to introduce “Big Little Lies.” Hulu means business. 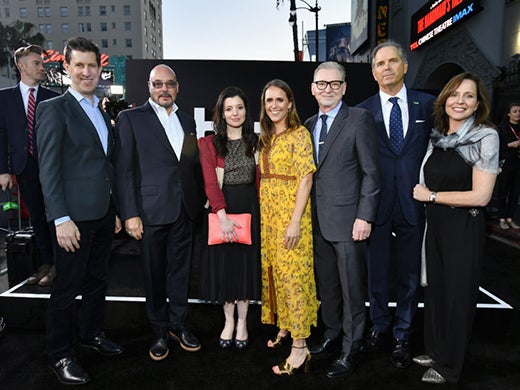 Craig Erwich, Hulu’s SVP and Head of Content, was the first to welcome the crowd inside the Chinese Theatre.

“There is nothing more dreaded in the music business than the sophomore album,” Erwich said. “I can tell you, there is no sophomore slump. Season 2 is a virtual Greatest Hits album.”

He went on to introduce the cast, using their first names only.  The one missing star was Yvonne Strahovski, who plays villainous house mother Serena Waterford.

“We just finished a week and a half ago,” Zoe White, one of the cinematographers told The Party Report on the way in. “We’re all still under-slept and exhausted and excited. It’s all still very fresh.”

But, hold on for a big finish

There are some big and iconic set pieces in the premiere, but they have a grand finish planned, as well.

“I saw episode 13 (the finale) rough cut last night,” cinematographer Colin Watkinson the Party Report. “It looks really good. I’m really proud of it. We’ve got a great end sequence. It’s going to come together very beautifully. As the cinematographer, I’m very happy about it.” 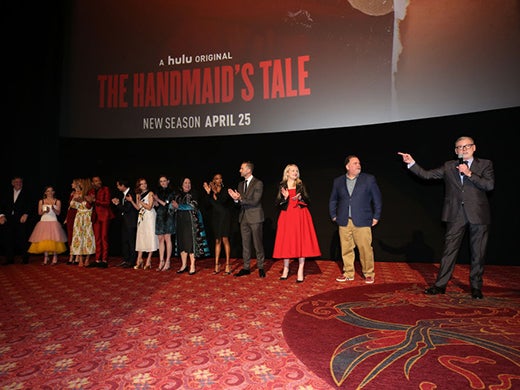 “Are we excited to show it to you?” Warren Littlefield asked rhetorically. “I think we’re kind of wetting our pants.” (Getty Images)

With half of Hollywood Boulevard shut down, traffic crawled east past the premiere. In addition to fans lining the street and a few hundred diehards staged by the entrance holding “Resist” signs, one guy in an SUV drove by yelling “Under his eye! Blessed be the fruit!” loud enough to get attention from the carpet. 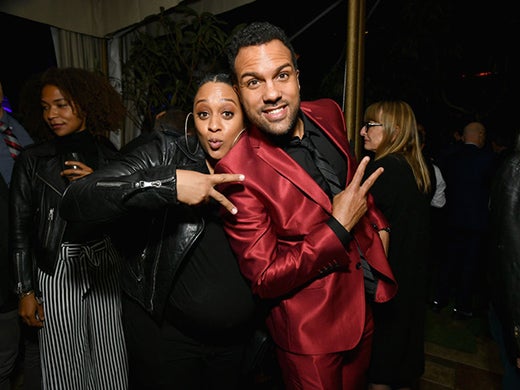 Shooting in Canada may be cold, but it’s not #MAGA-era America

Executive Producer Warren Littlefield is a busy guy on Emmy night. He runs “Handmaids” and “Fargo,” both MGM TV shows.

When he was shooting “Fargo” Season 3 and “Handmaid’s” Season 1 around the same time, he lived in Canada for 10 months straight.

“(It’s) a land of great leadership, a land of healthcare for all, and has an immigration policy that embraces the world — not a bad place, Canada,” Littlefield said. “I have deep respect and admiration for Canada.”

“It almost felt like we were camping outside of the trenches and in safety in some kind of weird way,” cinematographer White added.

Elisabeth Moss warned the crowd to hold on

Moss, the star and producer of the series, stepped forward to command the microphone at the end of the introductions. Instead of an awards show style speech, she deflected attention to showrunner Bruce Miller’s 19-year-old son Duncan on his birthday. She led the theater in singing “Happy Birthday,” and then warned the crowd:

“That was the last bit of joy you’ll get for this evening, so enjoy.”

Actresses stop by TheWrap for an interview and photo shoot