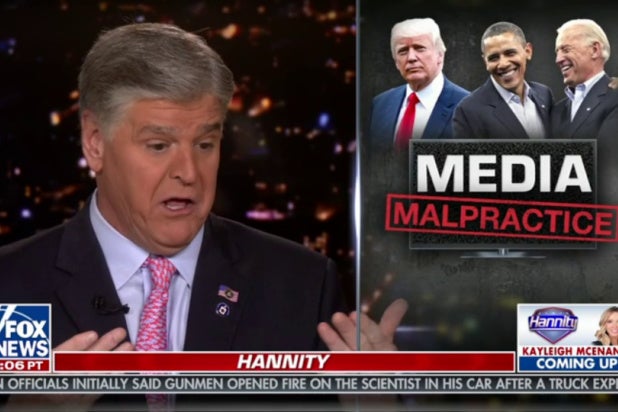 Sean Hannity caught the ire of lots of folks on Monday night when he appeared to tell his Fox News viewers that he doesn’t “vet the information on this program I give out.”

It was an idea that didn’t surprise many of the folks who ripped Hannity for this comment, since Hannity has been constantly pushing numerous baseless conspiracy theories about the presidential election over the past month. He even had disgraced former Trump lawyer Sidney Powell, who was fired by the Trump campaign recently after repeatedly coming up with bizarre and outlandish conspiracies, on his radio show on Monday.

The irony of Hannity’s statement about not fact checking the things he says on his show is that he said it while complaining about other members of the media.

“We’ll follow the facts. We’ll highlight concerning allegations and irregularities. We’ll also review some highly unusual voting patterns in America’s swing states. Now, that’s because we’re not the media mob,” Hannity said, pulling out his favorite insult. Though we should note that Sean Hannity is himself a member of the media.

“This show, we, in this hour, I am not told what to say. I don’t vet the information on this program that I give out,” Hannity said, as a graphic that, ironically, read “Media Malpractice” appeared on screen. “We have always been independent, follow our own path on the show. That’s not going to change for me ever.”

When the clip started going around on social media Monday night, it didn’t take long for everybody to start piling on Hannity.

Spoiler Alert: I know him. @seanhannity does not know what the word “vet” means https://t.co/WhnoSHeVva

Hannity bragging about producing fact-free infotainment is all you need to know about why America is messed up …. https://t.co/1WcC5Cx49S

.@seanhannity should be held accountable. They also need to reinstate the Fairness act. https://t.co/b9ZwHQeFvW

BREAKING: Sean Hannity “doesn’t vet” the information on his program

It’s just so hard to believe that Client #3 is a liar #Hannity https://t.co/DZFaEg6gvp

Sean Hannity is the Scott Atlas of Sean Hannitys https://t.co/gsbBnqcaYe

“I don’t vet the information on this program”.

And there you have it… pic.twitter.com/5o8FGGDtLJ

Hannity tried to walk it back later during a conversation with Kayleigh McEnany a few minutes later, though it was too late to do anything to stop his viral moment by that point.

“When I said I don’t vet this program, I vet the program, we vet the facts,” Hannity said. It certainly is plausible that he simply misspoke, as Hannity frequently does so — even his attempt to correct the record is not a coherent sentence.

Hannity attempts to distance himself from comments he made earlier in the broadcast pic.twitter.com/mDxOJhwbom

Meanwhile, the family of murdered Democratic National Committee staffer Seth Rich might disagree with Hannity’s attempt at claim he actually does vet his info. Last week, Fox News had to settle a lawsuit with the Rich family because Hannity, among others at Fox News, spent months claiming Rich’s murder was a Democratic conspiracy of some kind despite there being no evidence for such a claim.