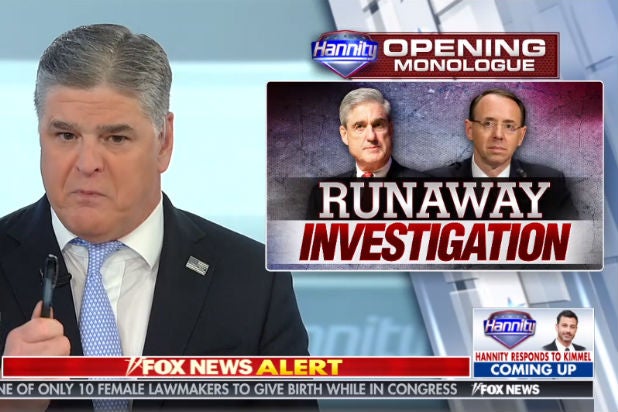 Sean Hannity devoted the top of his show Monday to a rant about the big news of the day: the FBI’s raid on the office of Michael Cohen, Donald Trump’s personal lawyer.

“Mueller’s witch hunt investigation is now a runaway train that is clearly careening off the tracks,” Hannity said during his opening monologue.

“We have now entered a dangerous new phase, and there’s no turning back from this. It is clear, as I have been warning, Mueller is out to get the president and it appears at any cost.”

“My message to Mueller tonight is simple: if you have evidence of collusion, any at all, show it to us or end this partisan investigation. The country is hanging by a thread tonight and you don’t seem to care,” Hannity said. “Now Mueller and [Deputy Attorney General Rod] Rosenstein, they’re truly fulfilling the mainstream media’s fantasy here, or at least attempting to.”

Hannity also took exception to Cohen being roped into Mueller’s investigation on the grounds that Cohen is not involved with the Trump administration in an official capacity.

“Keep in mind Cohen was never part of the Trump administration or the Trump campaign. This is now officially an all hands on deck to totally malign and if possible impeach the president of the United States,” Hannity said. “Now Mueller and Rosenstein have declared what is a legal war on the president, and a source close to President Trump tonight is telling Fox News that Mueller’s investigation is way out of control.”

Before moving on to other topics, Hannity summed his comments up like so.

“Robert Mueller is so far beyond his mandate. This is now spiraling out of control, and everything we have warned you about is now coming to fruition, and Mueller has ostensibly tonight declared war on the president of the United States. Clearly his objective is to remove him from office,” Hannity said.

“Mueller’s team is corrupt, starting with him, and it has been from the beginning.”