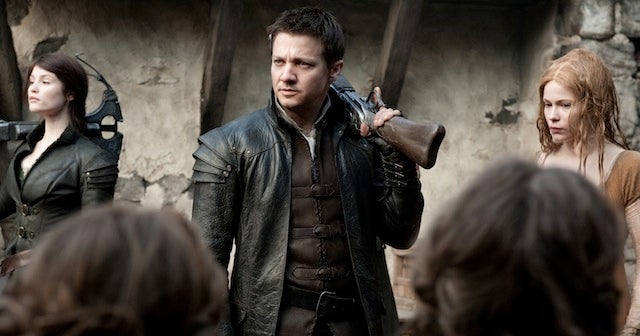 There are mash-ups — and there’s just mashed.

“Hansel & Gretel: Witch Hunters” is the latter, a squashed-together mess that tries to cram too many different types of movies into one and instead ends up as a pointless, steaming pile of cinematic detritus.

It must have sounded good at the pitch meeting. Take the Grimm Brothers’ classic tale about a brother and sister who are taken prisoner by a witch after nibbling on her candy house and cross it with a really badass action picture. Have the siblings grow up to become skillful bounty hunters who save medieval towns from marauding witches. Give the pair some seriously cool weapons, including giant hulking automatic guns and crossbows, with which to mow down the witches in as bloody a fashion as possible.

And, oh yeah, dress ‘em in tight black leather outfits that look like they come from “The Matrix” but maybe look a wee bit Middle Ages. Finally, just so everyone gets the joke, give Hansel and Gretel really foul mouths, so that they’re constantly dropping the F-bomb. That’ll be effing hilarious.

The best thing one can say about the resulting film is that it’s 88 minutes long and that its stars, Jeremy Renner (“The Hurt Locker”) and Gemma Arterton (“Tamara Drewe”), have done and will again do far better work.

Renner plays Hansel and Arterton is Gretel. Both are called upon to do much running and jumping, shooting of heavy weapons and cursing out of various demonic witches. Famke Janssen plays the most evil of the witches, a thankless role that frequently requires her to wear gobs of makeup or a prosthetic that makes her face look like it’s constructed of cracked porcelain.

Is there a plot, you ask? Why, yes, there is. It’s some sort of gobbledygook about a Blood Moon coming (it’s a kind of eclipse) and witches snatching and imprisoning children from a town. Hansel and Gretel must save the children, as well as uncovering a big secret from their own past.

The film was directed and co-written by Norwegian-born Tommy Wirkola, whose previous best-known credit was a small, mildly amusing Norwegian comic horror film called “Dead Snow” (2009), about Nazi zombies. Now, if he’d only had Hansel and Gretel battle Nazi zombies, maybe it would have been more fun.

Did I forget to mention that the movie is in 3D? What that means, besides a higher price at the ticket booth, is that lots of arrows and knives come flying directly at a viewer, as well as the bloody heads, entrails and other viscera of freshly slain corpses.