Ever wonder how the movie industry went from five-cent nickelodeons in New York to the glamour of Hollywood, with red-carpet premieres and the highest of artistic aspirations? Or why a certain pagoda-like Hollywood movie theater in whose courtyard rest footprints of actors is one of the most beloved and frequented tourist sites on the planet?

Look no further than the story of Sid Grauman, whose birth 130 years ago will be celebrated this Saturday, March 14, by the American Cinémathèque with a special tour and talk at his other landmark, the Egyptian Theatre in Hollywood. The event will be led by volunteer Mark Simon, a Grauman aficionado. 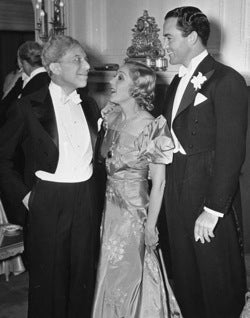 Born Sidney Patrick Grauman in honor of his St. Patrick's Day birthday in 1879, Grauman (at left in photo) always said, "I owe my tremendous success to the Man Upstairs," adding, "but having a name that got the Jews and the Irish behind me was what cinched things."

His childhood took him from Indiana to Colorado and then to Alaska, where he sold newspapers to miners, panned for gold and opened a live theater. (Jack London sold tickets for him, and Grauman's tales of Alaskan hardship reportedly inspired scenes in Chaplin's "The Gold Rush.")

But it was in San Francisco that Grauman found his calling, opening the Unique, featuring vaudeville performers such as Al Jolson, Fatty Arbuckle and Sophie Tucker, as well as movies, including the West Coast premiere of "The Great Train Robbery."

By 1906, Grauman had three theaters, but they all were destroyed by the San Francisco earthquake. Undaunted, Grauman set up a tent purchased from an evangelist on the site of the former Unique, with a sign that promised in the event of another temblor, there would be "nothing to fall on you but canvas." He sold 10,000 tickets a day.

A decade later, Grauman, by then "a very high-profile movie exhibitor," sold his San Francisco theaters to Adolph Zukor, the Hungarian Jewish immigrant and former furrier who founded Paramount Studios and who agreed to back Grauman's move to Los Angeles.

To lure people to Hollywood, real estate developer Charles Toberman partnered with Grauman to build a movie palace there. (Toberman was also behind the Hollywood Bowl and the Hollywood Roosevelt Hotel.) Grauman seized upon King Tut mania for the design of his 1,800-seat Egyptian Theatre on Hollywood Boulevard.

Grauman staged Hollywood's first movie world premiere at the Egyptian in October 1922 (before then all films opened in New York) for Douglas Fairbanks' "Robin Hood," arguably the actor's most successful film. 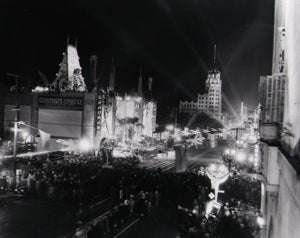 Ever the showman, Grauman gave the Egyptian a rectangular forecourt — perfect for stars to walk between the glow of klieg lights and for fans and photographers to accost them as they walked down a long red carpet to the theater's entrance. The notion of the red carpet, in fact, dates back to ancient Greece and is mentioned in Aeschylus' "Agamemnon" (but of course you knew that!), but Grauman was the one who saw its potential for raising Hollywood's international prominence.

The apotheosis of Grauman's ambitions is just down the street, the Chinese Theatre, a giant pagoda-like building, built at a cost of $2 million and decorated with imported Chinese artifacts.

It opened on May 18, 1927, with the world premiere of Cecil B. DeMille's "The King of Kings," preceded by the "Glories of Scripture," a staged pre-show with singing and dancing accompanied by a Wurlitzer organ and a 65-piece orchestra. Crowds lining the boulevard for a glimpse of stars caused a riot.

There are several accounts of how Grauman came up with his most famous publicity stunt — of having stars place their foot and handprints in wet concrete. One involves Mary Pickford chasing her dog during the theater's construction (Pickford and Fairbanks were investors in the theater), another has Grauman himself doing so and then asking Pickford to do so as well (the most likely
scenario), and the other involves the actress Norma Talmadge accidentally imprinting on the theater's opening night (less likely, since Grauman already had the concept).

One thing's for sure — Grauman knew from the first that his "footprint ceremonies" would be able to drive publicity and draw tourists, long after the theater opened.

Grauman was one of early Hollywood's great personalities. Legendary as a practical jokster, he once sent MGM's Marcus Loew to address an audience at the Ambassador Hotel, only to discover afterward the room was filled with dummies borrowed from the nearby Hollywood Wax Museum.

On another occasion, Grauman staged a Chaplin look-alike contest with official judges, with Chaplin himself as a secret contestant (Chaplin lost). One of his jokes almost gave director Ernst Lubitsch a heart attack — but if you want the details of that one, you'll have to attend Simon's tour.

Grauman was also an inveterate gambler. Simon relates a story that as a child, actress June Lockhart was witness to a game where Grauman lost the Chinese Theatre and then insisted the game continue until he had won the theater back.

No matter. In 1929, Grauman lost all his money in the stock market crash. Zukor rescued Grauman, buying his share of the Chinese and hiring him as managing director of the theater and an employee of Fox West Coast Theaters, an arrangement that lasted until Grauman's death in 1950, a few days after he officiated at John Wayne's footprint ceremony.

Looking back at Grauman, his career, and his lasting contribution, it is easy to wonder — who are today's Graumans? Movie premieres are now the province of the studios, and in recent years their event budgets have increased, even as their impact has shrunk. Who today goes to the movies because they saw publicity about a premiere?

Today's movie exhibitors, from Shari Redstone of National Amusements, Inc., to Hamid Hashemi, formerly of Muvico, have struggled to upgrade their theaters to make them destinations and entertainment centers, only to face falling
revenues that undo their best efforts. Locally, we might visit The Grove and marvel at the crowds, or visit the Arclight and commend Chris Foreman of Pacific Theaters for creating an art theater that can offer perks for a higher-priced ticket. But no one is integral to the movie industry in the way Grauman was.

What Grauman brought to Hollywood remains the gold standard. A Hollywood premiere at the Chinese Theatre, even today, evokes the past glamour of what still remains, nevertheless, America's greatest world export – the moving picture.

But for now, you can go the Egyptian this Saturday for Mark Simon's birthday lecture on Sid Grauman, to pay tribute to the master showman who helped make Hollywood an iconic place for the movies and the world that watches them – and not just by leaving his immortal footprints in the concrete.