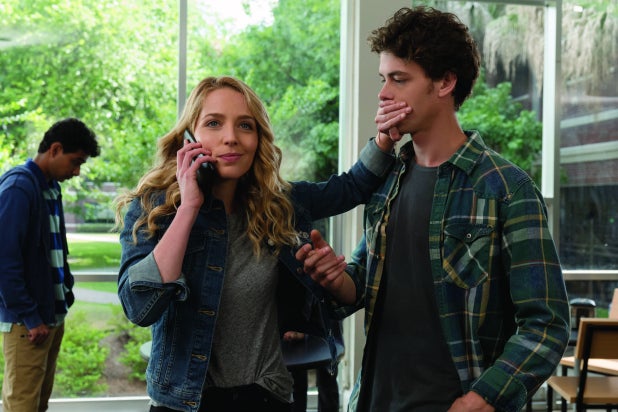 How do you make a sequel out of a film which, by design, was already repetitive? “Happy Death Day” was the best original slasher film in recent memory, and following up its “Groundhog Day meets Graduation Day” premise with another simple time loop would have been easy, and probably even fun. But returning director Christopher Landon has more ambitious ideas in “Happy Death Day 2U,” transforming the original high-concept slasher into a ambitious and witty sci-fi treatise on alternate realities and the cinematic significance of personal growth in sequels, which frequently forces protagonists to unlearn valuable lessons of the past, just so they can take the same cinematic journey over and over again.

The smart, funny “Happy Death Day” starred Jessica Rothe (“La La Land”) as a stuck-up college student who relived the same day over and over again, because at the end of it she always got killed by a psycho in a baby mask before waking right back up at the beginning. The film ended with Rothe’s character, Tree, solving her own murder and waking up on Sept. 19, the day after her deadly time loop, with her new boyfriend Carter (Israel Broussard).

“Happy Death Day 2U” begins at the exact same time, a few blocks away, when Carter’s roommate Ryan (Phi Vu) wakes up, interrupts their victory snuggle, and then walks to the college science lab to continue his previously unseen experiments with the “Sisyphus Quantum Cooling Reactor,” or “Sissy” for short. Oh yeah, we’re going there.

The invention, which sure has had a lot of unexpected activity lately (hmmm…), gets shut down by the school, and Ryan’s day only gets worse from there, because a killer in a baby mask murders him almost immediately afterward. Ryan wakes up once again on Sept. 19 and tries to tell Carter and Tree about his vivid sense of déjà vu, at which point Tree takes over as only Tree can, with endearing aggravation and a singular sense of humor, laying out the whole plot and grabbing a baseball bat to kick the babyface murderer’s butt.

But the solution to Ryan’s problem takes a very unusual turn, and it sends Tree rocketing back to Sept. 18, pissing her off to no end. But there’s something slightly different this time. Some of the familiar details from “Happy Death Day” have changed, and Carter is now the loving boyfriend of Tree’s sorority sister Danielle (Rachel Matthews), who no longer seems selfish and flaky. Tree is stuck in her old time loop, but now she’s in a parallel dimension, and that poses a whole bunch of brand new questions and problems.

“Happy Death Day 2U” isn’t screwing around. The plot kicks off in just a few short minutes and doesn’t wait for the audience to catch up to its unpredictable twists and borderline-impenetrable tech talk. This is fast-paced, endlessly clever filmmaking, with the new screenplay by director Landon (taking over from original writer Scott Lobdell) finding every new angle imaginable in a seemingly cyclical narrative. There are so many big developments that the movie seems to forget about one or two of them, although given how well-constructed the rest of the story is, they may be intentional set-ups for future sequels.

Landon’s film also takes the novel approach of changing the entire genre of the franchise. What started out as a slasher version of “Groundhog Day,” with no explanation whatsoever for its deadly time loop, is now officially “hard” science-fiction. There’s still a killer (it’s Tree’s birthday after all), but the majority of the deaths are self-inflicted, as Tree finds new ways to murder herself whenever she actually wants the day to restart, for reasons related to the plot or — as she watches her boyfriend make out with somebody else — morbid pettiness.

But although the death scenes are consistently funny, the actual scares are now minimal, and the intelligence and humor have taken over. Tree starts out as a pawn in an existential game and gradually finds her agency, and she makes seemingly impossible moral and ethical decisions about her own life, the lives of her friends, and maybe even the fate of the universe. While “Happy Death Day 2U” acknowledges that the meaningful personal journey Tree went on in the original film, though reset by external circumstance, it continues to change her in new and unexpected ways. This is not one of those sequels that simply remakes the original, even though Landon probably could have gotten away with that.

These “Happy Death Day” films are exceptionally well-written and directed, but this is Rothe’s franchise. The series asks an impossible amount from the actor, and she juggles every complex element, making it look easy. The fear, the frustration, the power, the humor, the romance: Rothe nimbly keeps it all alive with ingenious body language and expressions so readable they’re practically a universal language. She’s matched at every turn by a stellar supporting cast, who turn bizarre dialogue into endearing character beats, but “Happy Death Day” and “Happy Death Day 2U” make the bulletproof case that Rothe should be a major star in the Hollywood firmament.

And of course, “Happy Death Day 2U” would be nothing without the brilliant editing from Ben Baudhuin (“Colossal”). The complex task of keeping the audience up to speed with all these perpetually changing timelines, character developments and regressions, and the impeccable timing of every background detail is an incredible achievement. They only look breezy, these “Happy Death Day” movies. They’re about as complicated as complicated gets. The script supervisor deserves an honorary Academy Award for keeping all of this straight.