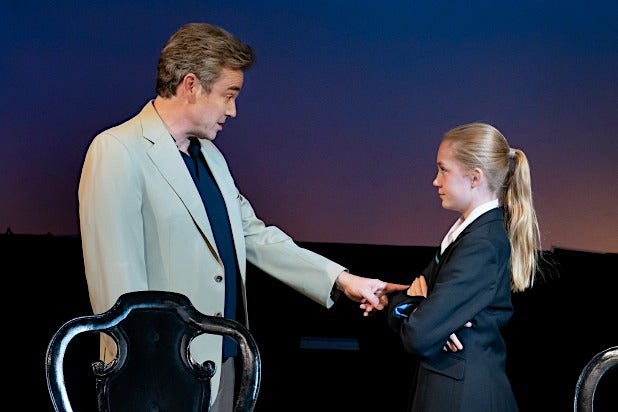 The world’s most intellectual, brittle playwright has grown a heart as big as old Paramount Pictures. “The Hard Problem” opened Monday at Lincoln Center Theater’s Mitzi E. Newhouse, and with it, Tom Stoppard takes on nothing less than the source of consciousness. How does the brain create it out of a bunch of ordinary molecules?

It makes dramatic sense that the characters of “The Hard Problem” get to debate the mind-body relationship, because most of them work for a think tank called the Krohl Institute for Brain Science. It’s located in London even though the company is funded by Krohl Capital Management, which is the creation of Jerry Krohl (Jon Tenney), the gross American capitalist who may very well be the great grandson of Lionel Barrymore in “It’s a Wonderful Life.” Stoppard wows us with his talk of “neurobiology crossovers” and “quantum-level brain processes,” but when it comes to developing his characters, he doesn’t bother being subtle or even remotely smart. American equals crass, and British equals…well, those characters are nicer and brighter but sometimes much gooier.

Take the play’s British heroine, Hilary (Adelaide Clemens), who lands a job at Krohl even though she’s a psychologist and the institute is geared more toward the hard math of brain sciences. When asked in her job interview how consciousness exists, Hilary answers, “I have no idea, and nor does anyone else. I thought that’s why we’re here. To crack the Hard Problem.”

Again, Stoppard isn’t subtle. Hilary not only prays to God, she kneels beside her bed — head down, eyes closed, hands folded — to pray to Him, despite much guff from her erstwhile boyfriend (Chris O’Shea). Hilary believes in the unknowns. As she puts it, “[E]very theory proposed for the problem of consciousness has the same degree of demonstrability as divine intervention. So — psychologically — they’re equivalent.”

Many of her verbal battles with colleagues are fascinating. Especially scintillating is the one she has with her boyfriend about Rose of Sharon, who may be nothing more than a vampire bat regurgitating blood to feed a hungry stranger at the end of “The Grapes of Wrath.” Or does Steinbeck’s character give her mother’s milk out of pure altruism? Also riveting is the pre-dinner about the tortuous journey of a parasite that lives inside cows and re-enters these vegans by first being shat out, then digested by ants that are hard-wired to climb stalks of grass repeatedly until the cows gobbles them up. I left out a few steps here, but suffice to say, it’s an example of “altruism” according to one of Hilary’s more hard-wired scientist friends.

These discussions don’t further the drama, but they do lace it with humor. What truly pumps Stoppard’s story is the heart he’s grown that’s as big and corny as old Paramount Pictures. Hilary ultimately wins our sympathy, but not because she believes in God or thinks that good works and creativity and art can’t be explained through math and science. At age 15, she was forced to give up her baby, Catherine, because Hilary was unwed. She calls this lost but not forgotten child the last of the “shame babies.” Stoppard gives no precise dates for his play, but it’s clearly not set in 1946, the year Paramount released that classic Olivia de Havilland weeper “To Each His Own,” which presents a far more credible reunion of a mother and her out-of-wedlock child.

Under Jack O’Brien’s direction, Clemens is every bit as convincing as de Havilland in her journey from optimistic neophyte to seasoned career woman. O’Shea, unlike a few other actors in this production, manages to escape being a mere mouthpiece for the losing side of Stoppard’s arguments. And Tenney’s initial bluster softens considerably to help facilitate the play’s soapy ending.

Unfortunate is O’Brien’s decision to have a half-dozen stagehands, credited as the “ensemble,” remain on stage to watch the action. They sit upstage, expressionless but carefully posed, as if waiting for an ad photographer from the United Colors of Benetton.