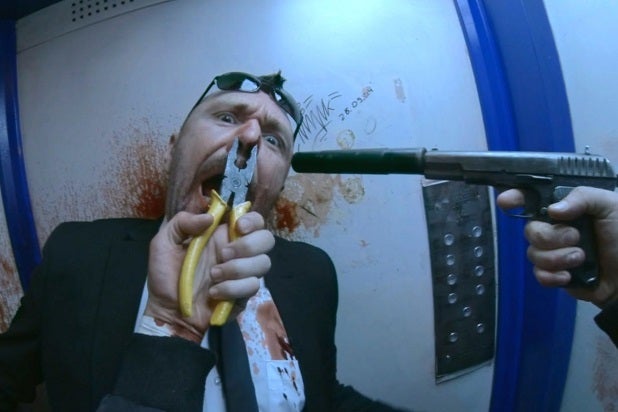 I was eager to see “Hardcore Henry” for one main reason: I wanted to know what the movie version of a video game looks like.

Sure, we’ve seen a bunch of movie adaptations of games before, but that’s different. Those are actual movies. “Hardcore Henry” really is not and, to be fair, it’s not trying to be.

As you may know, “Hardcore Henry” is a “first-person” movie. It was filmed with GoPro cameras strapped to the faces of stuntmen. It tells the story of a man named Henry who has robot arms and legs and all sorts of other fun cyborg enhancements, and the entire movie is viewed from his perspective.

The experience of watching “Hardcore Henry” is a lot like that of watching a “let’s play” video on YouTube. For those uninitiated among us (which is most of us, so don’t feel bad), that is where someone records themselves playing a game and either uploads it to a video site or streams it live on a service like Twitch. You wouldn’t think of watxching a “let’s play” the same way you would think of watching a movie. Likewise, watching “Hardcore Henry,” even in a movie theater, didn’t much feel like watching a movie.

It was so akin to watching someone playing a video game because of, well, everything it does. It’s a perfect aping of how a video game tells a story.

Henry is a protagonist who never speaks and who we never even see, like many video game heroes. The “beloved” Gordon Freeman of the “Half-Life” series of games regularly came to mind, thanks to the film’s mostly unbroken perspective. Also the many scenes of people saying things at him without him saying anything back.

Action sequences function as levels. You get a couple minutes of exposition explaining Henry’s immediate goal (a “cutscene”) followed by a lengthy sequence of frenetic violence as he completes that goal (“gameplay”). Repeat. And repeat. And repeat.

Set pieces often play on video game tropes — for example, a part in which Henry and his pal Jimmy need to defend an exposed elevator as it descends through a building, and a road sequence in which Henry sits in a motorcycle side car shooting at bad guys with a minigun.

In a video game that structure is typically just accepted as a necessary thing, but there’s a reason movies usually don’t work that way. It’s not, it turns out, a good way to tell a story or develop characters. They do it in games because the “playing” part is inherently prioritized over the storytelling. They want it to be fun and compelling to play, first and foremost.

Even most action-heavy movies, on the other hand, are largely about people talking to each other. Filmmakers want you to care about the characters and what they’re doing. Character development aids in suspension of disbelief for the viewer, and a big plot twist is only as effective as the steps a story took to get there.

Filmmakers also know there’s only so long you’re gonna be willing to sit in a theater or in front of the TV, so they almost always keep it under two-and-a-half hours. Keeping players engaged to the end of a video game is not really something game developers tend to be concerned with. Very few games have a player completion rate above 50 percent. That fact is accepted as basically a law of nature idustry, so they don’t worry about it much.

“Hardcore Henry” manages to be the product of those fundamental difference between the two types of media. It has the economy of a movie at 96 minutes long, but all the storytelling aspirations of a game. It actually suffers for usingructure more than a game would — it’s extremely unusual for a video game that tells a story to run under five hours, and most go much, much longer than that. Its success or failure with each viewer will hinge entirely on their acceptance of its novelty as an action movie shot entirely from a first-person perspective. Just as a game’s success or failure with a player usually hinges on whether they think the “playing” part is enjoyable.

For me, the novelty of “Hardcore Henry” wore off very quickly. By the end I was just bored, because I didn’t care about Henry or what he was doing. It’s as great a testament to the bad approach video games take to storytelling I’ve ever seen.

And that, to me, is “Hardcore Henry’s” biggest accomplishment.