Proving that there’s no such thing as bad publicity, on Wednesday the official Hardee’s Twitter account had a little fun by using that whole Mike Lindell-FBI thing to promote its menu.

“Now that you know we exist… you should really try our pillowy biscuits,” the account tweeted on Wednesday morning.

Now if you were among the people who didn’t know Hardee’s existed, there’s a good reason: It’s owned by the same company that owns Carl’s Jr. — the fast food siblings even have similar logos and similar menus. But they have basically divided the United States between them along a roughly diagonal divide. Carl’s Jr. is all over Texas, Colorado and Idaho and every state West of them, while Hardee’s is in the rest of the country; Oklahoma and Wyoming have both. 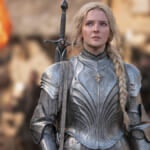 Also Read:
Amazon’s ‘Rings of Power’ Debuts at No. 3 on Most In-Demand New Shows List | Chart

Anyway, a Hardees was where on Tuesday the FBI approached MyPillow founder and right-wing conspiracy theorist Mike Lindell to seize his cellphone. Lindell later told The Daily Beast that the cellphone seizure is connected to an investigation into another conspiracy theorist named Dennis Montgomery.

Eventually the FBI confirmed Lindell’s story, telling the Daily Beast, “Without commenting on this specific matter, I can confirm that the FBI was at that location executing a search warrant authorized by a federal judge.”

Anyway, Hardee’s is pretty good stuff if your options are limited to fast food. But we’ll get our biscuits from Popeye’s.