And it’s nothing to do with a carpenter’s magic chalice: Thanks to technology that started as a top-secret Hollywood vanity trick, the crusading archaeologist’s latest chapter will circle back to the WWII era of the first, as a digitally de-aged Ford appears in the “Indiana Jones 5” opening sequence set in 1944, according to Empire.

As all decent serial adventures should, the previous four “Indy” films each dropped us into the middle of an action setpiece, a tradition that got rolling with a boulder and landed in a fridge. For his part, “5” director James Mangold told Empire that before the yet-untitled “Indy” takes audiences to 1969, he’s throwing back to ’44 – in a castle swarming with Nazis.

“I wanted the chance to dive into this kind of full-on George-and-Steven old picture and give the audience an adrenaline blast,” Mangold said, referring to George Lucas (the series creator) and Steven Spielberg, who directed the first four films). 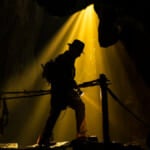 But digital de-aging can be a cinematic high-wire act. For every “Benjamin Button” and “The Irishman,” there’s been a laughable “Tron: Legacy” or “Rogue One” sequence that stops the audience cold. Has the “uncanny valley” finally been successfully spanned?

Ford seems to think so.

“This is the first time I’ve seen it where I believe it,” Ford told Empire. “It’s a little spooky. I don’t think I even want to know how it works, but it works. … Doesn’t make me want to be young, though. I’m glad to have earned my age.”

He just won’t look it when the fifth “Indiana Jones” film hits theaters on June 30.