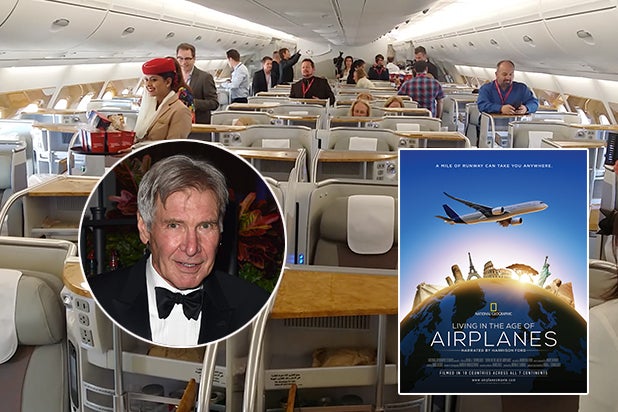 Harrison Ford narrates "Living in the Age of Airplanes" but was unable to attend the 7 mile high premiere on April 6. (Mikey Glazer, inset by Getty Images)

Dome screen and giant screen formats are the caviar of film – an expensive delicacy doled out in small portions.

75 Hollywood insiders and media figures were treated to caviar “push pops” in the Emirates VIP lounge at LAX on Monday before jetting off on a double-decker plane for the premiere of “Living in the Age of Airplanes.” Harrison Ford narrates the 47-minute panorama of the ultimate disruptive technology.

All aboard: a movie premiere on the tony upstairs of a double decker Emirates A380. (Mikey Glazer)

Ford, who recorded his voice over in spring 2014, was supposed to attend before he was seriously injured when he crash-landed a vintage World War II era plane shortly after taking off from Santa Monica airport last month.

“Living in the Age of Airplanes” was shot on all 7 continents and 18 countries. (National Geographic Studios)

Ford’s aviation credentials are well documented, and not just the fictitious ones like fighting off terrorists on “Air Force One”.

As TheWrap’s Linda Ge previously reported, Ford was named Chairman of the Experimental Aircraft Association’s Young Eagles program and is a supporter of Wings of Hope, an aviation philanthropy.

Shot on every continent on earth and in 18 countries, the 47 minute film is a panorama of human anthropology, punctuated by animated infographics like “Top Speed Ever Reached by a Human” over an axis of 200,000 years of human existence from antiquity through modern times.

Spoiler: the graph is a flatline for 99.9% of eternity until a jolting last minute “hockey stick”.

Ford’s soothing narration advises that for most of human existence, people never traveled more than 20 miles from their home. “Entire civilizations rose and fell without ever knowing of each other,” Ford says.

Underlining the relatively new paradigm shift, producers follow flowers snipped from a field in Kenya, as they make their way via Amsterdam and the U.S .to a vase in Alaska in a matter of hours.

Director/Producer Brian J. Terwilliger  paints a more visually elegant shorthand of what Thomas Friedman penned a decade ago :“The World is Flat.”

His tagline echoes the theme: “A mile of runway can take you anywhere.”

Composer James Horner (center) and two people to his right, the guy Hollywood needs to know to sell inflight content to for his 2100 channels, Patrick Brannelly.

Terwilliger spent six years on this passion project and went to every corner of the globe – from the South Pole and Iguazu falls in the southern hemisphere, to the Grand Canyon, to successfully navigating elephants crossing a runway in Kenya to get the shots.

This guy knows his way around a carnet.

On Monday’s premiere, guests took in the flight on 20” screens from the all business-class and first class top floor of the Emirates A380 (which usually goes LAX to Dubai, not making 150 mile loops over our city.) This is the plane that has first class “shower spas” on board, 2100 TV stations,  and a roving photographer shooting the social scene in the lounge on all flights, not just media events.

At 47 minutes, the film will nest nicely with the hourly screening timetables demanded by museums with the appropriate screens to show the film.

One such place, The Smithsonian’s National Air and Space Museum  in Washington, DC had their own premiere on Wednesday night before regular showings.

“Living in the Age of Airplanes” will roll out to theaters over several months beginning this Friday, April 10.