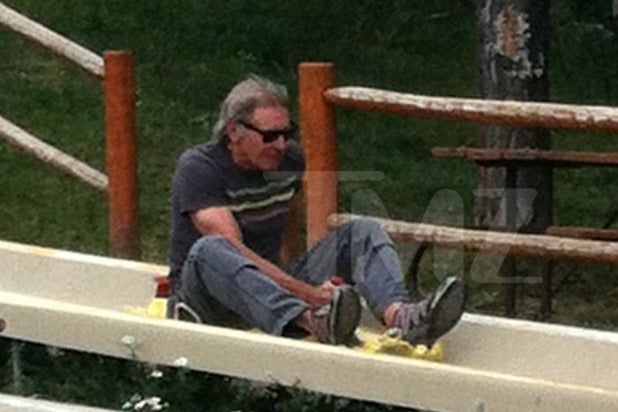 Harrison Ford isn’t taking it easy as he recovers from the broken leg that has delayed shooting on “Star Wars VII.”

TMZ posted an exclusive image of the actor, who is recovering from an on-set injury that temporarily halted production, riding down a massive slide near his home in Jackson Hole, Wyo. The headline is one of TMZ’s best: “Solo Goes Yolo.”

The film took a two-week hiatus this month to adjust to Ford’s recovery time, but the production’s blog assures us that “shooting remains on track to wrap in the fall with the film scheduled for release on December 18, 2015.”

That didn’t stop TMZ from doing a little worrying, theorizing that director “J.J. Abrams ain’t gonna like this … ’cause Harrison Ford put his recently broken leg at risk this week when he went barreling down a 2,500 foot mega-slide — just days before he’s due back on the ‘Star Wars’ set.”

Okay, maybe. But would you rather have a Han Solo with a broken leg or no guts? Also: It’s only a slide.