Real Househusband Harry Hamlin has a new role. The actor is joining the cast of AMC’s “Mayfair Witches.”

Hamlin will play the role of Cortland Mayfair, the current reigning patriarch of the Mayfair clan with a voracious appetite for more money, more power and more life.

The series is based on the gothic supernatural trilogy “The Lives of the Mayfair Witches” by author Anne Rice. It will focus on an intuitive young neurosurgeon who discovers that she is the unlikely heir to a family of witches. As she grapples with her newfound powers, she must contend with a sinister presence that has haunted her family for generations. Alexandra Daddario was previously cast in the leading role.

Hamlin has previously had recurring roles on series including “Veronica Mars,” “Glee,” “Mad Men,” and “Shamless.” 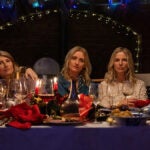 Esta Spalding and Michelle Ashford serve as writers and executive producers on the series, with Spalding also serving as showrunner and producer. The eight-episode first season is set to debut on AMC+ and AMC later this year.

Last year, the network acquired the rights to 18 Rice novels, including “The Vampire Chronicles” and “The Lives of the Mayfair Witches” book series. The TV adaptations are being overseen by Mark Johnson, as part of his overall deal with AMC Studios, and Rice’s son Christopher. Anne, who passed away in December, was also an executive producer on the adaptations.

AMC is currently in production on another adaptation from the prolific late author, “Interview with the Vampire,” which will star Sam Reid as Lestat and Jacob Anderson as Louis.