Ain’t It Cool News founder Harry Knowles exploded into internet glory by ignoring boundaries. But boundary-breaking also hurt him and his site long before he stepped aside this week over sexual assault and harassment accusations.

Knowles practically invented film geek reporting, then drew criticism for cozy relationships with the studios he once critiqued. In the last decade, he has been overshadowed by other fan-focused empires, and studio and networks’ increasingly savvy attempts to harness fandom.

Ain’t It Cool News, like the Drudge Report, gained fame in the ’90s by bypassing traditional journalistic customs and gatekeepers. But Knowles failed to adapt to the new world he helped create. Three former contributors told TheWrap the site lost its way because of Knowles’ ego, lack of business skill and sense of entitlement.

Also Read: Harry Knowles to 'Step Away' From Ain't It Cool News After Sexual Assault Accusations

“Bottom line, this has always been about Harry, his celebrity and whatever he could get out of it,” said one of the contributors. “There is not one business person who has dealt with Harry who hasn’t been f—ed savagely.”

“Harry has no personal boundaries, whether verbal or physical,” he added.

The fall of Knowles — who did not respond to requests for comment — is all the more staggering because of his astonishing rise. He came from Austin — and nowhere.

In 1994, he told The New York Times, he bought a computer with insurance money he received after his mother died in a fire. The next year, setting up for a movie collectibles sale, he tripped over a hose, and “everything below my neck went dead for a while,” he told the paper.

“For a half a year or so I just laid here. I was really worried about what I was going to do with the rest of my life. I always had this dream of going into the movie business, and here I was in bed, with no future,” he said.

From his bed, he turned his fascination with movies into Ain’t It Cool News, which sidestepped press wranglers and studio publicists to get inside scoops directly from people in the know — folks on sets who leaked details, members of test audiences who saw early cuts of films.

Full disclosure: Starting in 2002, one of the authors of this story, Umberto Gonzales, was one of Knowles’ contributors. He dealt with one of his code-named intermediaries, Lobo, and met Knowles at Comic-Con, where his wife Patricia wheeled him around on the wheelchair he sometimes relies on due to his injuries. Gonzales did not see him interact with women other than his wife.

At that point, his site was thriving — but cracks had begun to show.

“Metaphorically, you can warn Harry that a train was about to run him over, and even if three other people told him the exact same thing, he would trust his instinct over the most reasoned logic you can give him,” a former contributor told TheWrap.

It was around the time the site was booming — in the late 1990s — that the first of Knowles accusers says he began repeatedly touching her, repeatedly and uncomfortably, without her consent.

Meanwhile, he was starting to face accusations that he had been seduced by the Hollywood insiders he had once critiqued.

“Studios fly him first-class to screenings, set him up in fancy hotels and grant him privileged access to closed sets. The chat shows are hot for him,” Guardian writer John Patterson argued in 2002. “He’s been accused of getting into bed with any producer who will wine and dine him, let him ride in a limo or stand next to Cameron Diaz at a premiere.”

And over the next few years, other film sites gained traction — including joblo.com, chud.com, darkhorizons.com, and slashfilm.com. Mainstream outlets like Entertainment Weekly got more involved in deep-dive coverage of geek culture.

And Knowles was getting slow, one of the former contributors said: “I feel like Aint It Cool got lazy. They stopped updating. News stories got up late, if at all.”

Knowles was also focused on other exploits. Besides appearing on the “chat shows” mentioned by Patterson, he also developed TV and film projects. At one point he was attached to “John Carter,” which in 2012 became a box-office failure for Disney. In that same year, he began hosting “Ain’t It Cool With Harry Knowles” for PBS.

Slashfilm.com founder Peter Sciretta told TheWrap: “Harry got pulled in other directions. He wanted to produce movies and he wanted to make TV shows. … I think he spent more time trying to do those things while the staff minded the store.”

But staffers weren’t always happy, in part because of the way Knowles’ friend and business manager, Roland De Noie, failed to take care of business. One of the contributors who spoke to TheWrap said De Noie was routinely late getting staffers the paperwork they needed to pay taxes.

“Roland is the most ineffective and incompetent business manager I have ever dealt with,” the contributor said. “After a press screening once, Harry thought it was hilarious to tell whoever was standing near him that Roland had finally gotten a site contributor his tax paperwork, but that it was all screwed up. Harry found this hilarious because that person had left the site for another job, and to Harry, that made them a traitor. Which is ironic, because in some way or another, Harry has betrayed every person he has ever done business with.”

It was all the more galling, the contributor said, because Knowles lives his life surrounded by movie merchandise, which he keeps stacked, hoarder-like, all around him. Some of it is valuable.

“Harry would rather allow his employees to go unpaid, their families go hungry, and their houses get foreclosed on than sell some of the loads of movie merchandise that literally makes his father’s house a fire trap,” the contributor said.

De Noie did not respond to a request for comment.

He remains the site’s business manager, which is even more remarkable considering that Knowles soon had tax problems of his own. He told The Hollywood Reporter in 2013 that because of De Noie’s errors, the site owed $300,000 in back taxes. The THR story said that while Ain’t It Cool News pulled in $700,000 a year in gross advertising revenue in the early- to mid-2000s, the number dipped to the low-six figures by 2012.

And then the first woman spoke out.

Earlier this month, another Austin film institution, the Alamo Drafthouse, admitted that it had quietly rehired the editor of its film site, Birth.Movies.Death., Devin Faraci, soon after he had resigned because of a sexual assault allegation. Faraci resigned again, but the story renewed interest in sexual assault and harassment in the film-geek community.

Soon attention turned to Knowles. A film fan named Jasmine Baker told IndieWire that she and Knowles had both attended Drafthouse screenings and events in 1999 and 2000, and that on different occasions he rubbed up against her, including against her legs and buttocks, in a way that made her uncomfortable. When she confronted him and told him not to touch her again, “He just giggled about it,” she said.

At least once, she said, he put his hand up her shirt. IndieWire spoke to two friends of Baker who said she had told them about multiple cases of Knowles touching her without consent.

“I categorically deny it,” Knowles told IndieWire, adding that Baker “treated me like a confidante.”

Soon, other women spoke out. “On more than one occasion HK has grabbed my ass and other parts of me. I just learned to not go within grabbing distance of him,” tweeted Austin resident Gloria Walker, 29, who went on to describe other alarming interactions with Knowles.

Austin film writer and ScreenCrush associate editor Britt Hayes, 32, also tweeted. “Harry sexually harassed me. He has sexually harassed other women in this community for years. This wasn’t an anomaly. He is a predator,” she wrote. She says that Knowles once reached out to her online to ask if she wanted to know “the real way” to get into a screening he was hosting, and then told her, “show me your tits.”

Another film writer, who uses the handle “sick__66,” posted a screenshot of messages she says Knowles sent her after they chatted online about film. “Your eyeliner makes you look good enough to eat. Obviously I’m talking cannibalism, baby. You can have my Vienna sausage anytime,” said one series of messages. 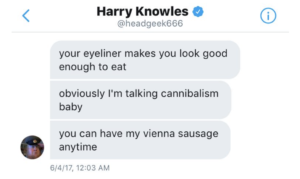 And a former Drafthouse employee, Jill Lewis, said Knowles had once “grabbed my arm, asked me to come closer, and then told me he was on mushrooms, and that he and his wife had been talking about wanting to see me naked, and asked me to do just that with them that night.” (IndieWire has more details about all of the accounts above.)

On Monday, longtime Ain’t It Cool News staffers Eric Vespe and Steve Prokopy resigned from the site. “I have known too many women over the years — both inside and outside the film community — who have encountered and survived sexual harassment and/or assault to allow myself to remain involved in an organization where allegations of either are part of the landscape,” wrote Prokopy in a statement.

“Given the recent allegations against Harry Knowles of behavior impossible to defend I can not, in good conscience, continue to contribute to the brand I helped build over the last 20 years,” wrote Vespe.

On Tuesday, Knowles said he would step away from the site to focus on “therapy, detox and getting to a better place.” He said he would hand over operations of Ain’t It Cool News to his sister “while I step away.”

One contributor told theWrap that even though those who worked for the site knew Knowles had issues with boundaries, they went for years not believing he would harass or assault women.

“Frankly, looking back at things, I feel terrible none of us shut it down,” the contributor said.