Harry Melling, who played Dudley in the Harry Potter film franchise but also had a big role in Netflix’s “The Queen’s Gambit,” has signed on to another Netflix project to play famed poet Edgar Allan Poe.

Melling will star alongside Christian Bale in “The Pale Blue Eye,” a thriller that’s being directed by “Hostiles” director Scott Cooper. The Gothic horror story, based on a 2003 book by Louis Bayard, follows Bale as a veteran detective investigating a gruesome murder in 1830 at West Point Academy. However, the whole case surrounds a young cadet who the world will eventually come to know as Edgar Allan Poe (Melling).

Cooper also wrote the screenplay, and he’s been itching to take on the film for more than a decade. Netflix picked it up out of the European Film Market for a record $55 million in a worldwide deal, and it also reunites Cooper with Bale for the third time after also working together on “Out of the Furnace.” Cooper is also producing “The Pale Blue Eye” with John Lesher, and Tyler Thompson of Cross Creek Pictures. 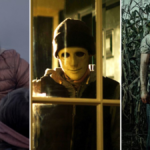 In addition to “The Queen’s Gambit,” where he played the character Harry Beltik, Melling has also worked with Netflix on “The Old Guard” and “The Devil All the Time.” He’ll next be seen in Joel Coen’s “The Tragedy of Macbeth” with Denzel Washington and Frances McDormand, and he previously worked with the Coen Brothers on their Western “The Ballad of Buster Scruggs.” He also recently wrapped production on the indie film “Please Baby Please,” in which he stars opposite Andrea Riseborough, Demi Moore and Karl Glusman.