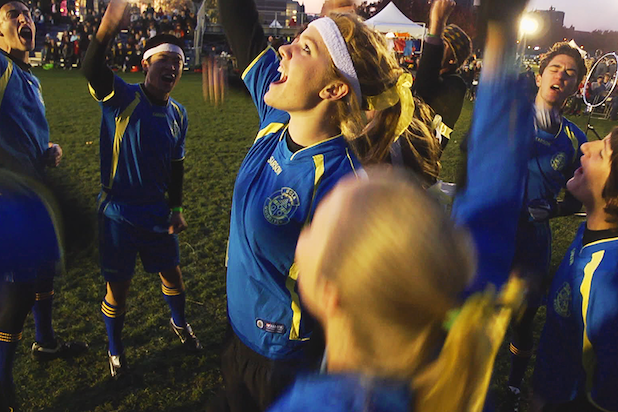 JK Rowling is back writing “Harry Potter” spinoff movies, but she’s no longer the only person making movies based on her famed book franchise.

Behold the first poster for “Mudbloods,” a feature documentary about the sport of Quidditch — as played in the real world. The movie, directed by former UCLA film student Farzad Sangari, tracks the UCLA Quidditch team as they make their way to the Fifth Annual Quidditch World Cup in New York City.

There’s no flying brooms in this version of the game — sure, Harry Potter was heroic playing for Gryffindor, zipping around on his broom and seeking the snitch, but we muggles haven’t figured out how to get cleaning tools to fly yet — but it’s exciting all the same. The synopsis for the film — which raised quite a bit of money on Kickstarter — promises “nail biting victories and losses,” in a portrait of “the dreamers, creators and athletes who make up this exceptional community come together to make this magical sport into something you could’ve never imagined-until now.”

The film premieres on June 21st at AFI Docs in Washington, DC, and will be distributed by BOND/360 in limited theatrical and full VOD in October.