Four women have stepped forward to corroborate my New York Times reporting on Harvey Weinstein from 2004 that the former head of Miramax Italy, Fabrizio Lombardo, acted as a procurer of women rather than a film executive.

Actress-director Asia Argento — who alleged in the explosive New Yorker piece published on Tuesday that she was orally raped by Weinstein during a 1997 encounter outside Cannes, France — tweeted on Tuesday night that Lombardo brought her to the mogul’s room in 1997.

“He told me it was a Miramax party,” she wrote. “Only Harvey was there.” It’s unclear if she was referring to the same incident she described in the New Yorker — in which she said an unnamed “producer” lead her to Weinstein’s room — or a separate one.

In addition, Sacha Voski, a model based in Italy in 1988 and 1989, has come forward to say that Lombardo “relentlessly stalked” her at that time, and Zoe Brock wrote a post on Medium describing a frightening stalking by Weinstein, citing Lombardo.

“He just kept coming after me…..calling me 12 times a day…..convincing convincing convincing me….offering me one of his many empty apts he just happens to have laying around Milano,” Voski wrote in an email to me. “And the ‘good life’ to go along with it…considering I had no aquaintence with him, this all was quite psycho in my eyes. I was definitive with my no’s….it just didn’t matter….he just kept coming….”

Voski said she never met Weinstein and did not let Lombardo get close enough to know who employed him. She said she went to the police to denounce Lombardo, and shortly thereafter left Milan and quit the business for a time. 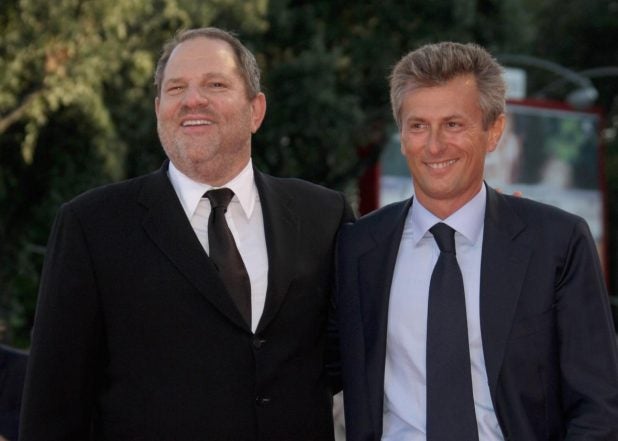 Update on October 12: Lombardo was reached by the Guardian newspaper and denied being a procurer of women for Weinstein.

“I did not hunt for him,” Lombardo said in direct response to an allegation by Zoe Brock, accompanied by his attorney. “It is not my style … it is not my relationship with Weinstein,” he added.

Voski reached out and at first would not go on the record, but reconsidered, writing me: “I want to help remove the evil. You can put me on record.”

A third woman, a producer, contacted TheWrap to say that Weinstein and Lombardo were a pair seen year after year at the Venice Film Festival.  “That was his playground,” she said, referring to Weinstein. “He and Fabrizio set up court at the Excelsior Hotel bar. Girls would come by.”

Zoe Brock, a former model, wrote a vivid post on Medium about her encounter with Weinstein and Lombardo, describing a terrifying encounter with Weinstein at the Hotel du Cap in Monaco in 1997. She describes how Weinstein cornered her in his suite, she locked herself in the bathroom and told him to be ashamed of himself. When she came out she found Weinstein sitting on the bed, crying. Lombardo was there earlier that evening.

Writes Brock: ” I saw him again later that week and he claimed to have no idea and was so apologetic about what happened. He had a really lovely girlfriend and they both invited me to visit them in Rome a couple of weeks later. I arrived late in the day and discovered they had only had one bed. When i made it clear I was not going to be their third wheel I slept on a sofa and had to endure the sounds of them having really loud sex. It was too late to train back out and I was too broke to get a hotel and too scared to sleep on the streets.”

The New York Times and I have been on a tear in the past few days as people debate why the paper stripped out any reference to Lombardo procuring women in my 2004 story, and then buried it on an inside page. I stand by my position, and I am glad to see these women step forward to help bring clarity.

Who was Lombardo, you ask? His official job was head of Miramax Italy. From my 13-year-old piece: “According to an executive who has seen the internal payroll records, Mr. Lombardo was paid 335,895 euros, or $403,000, from Nov. 1, 2003, to July 31, 2004, based on an average exchange rate from the first half of 2004. Miramax executives disputed that account, saying the company last paid him in March 2004, seven months after the Italian division closed.”

And this: “Miramax kept the executive, Fabrizio Lombardo, on its payroll for months after closing the Italy office in August 2003.”

Argento, long rumored to have been a victim of Weinstein, came forward this week to charge Weinstein with rape. Here’s how Argento describes her first encounter to the New Yorker:

At the time, Argento was twenty-one and a rising actress who had twice won the Italian equivalent of the Oscar. Argento said that, in 1997, one of Weinstein’s producers invited her to what she understood to be a party thrown by Miramax at the Hôtel du Cap-Eden-Roc, on the French Riviera. Argento felt professionally obliged to attend. When the producer led her upstairs that evening, she said, there was no party–only a hotel room, empty but for Weinstein: “I’m, like, ‘Where is the fucking party?’ ” She recalled the producer telling her, “Oh, we got here too early,” before he left her alone with Weinstein. (The producer denies bringing Argento to the room that night.) At first, Weinstein was solicitous, praising her work. Then he left the room. When he returned, he was wearing a bathrobe and holding a bottle of lotion. “He asks me to give a massage. I was, like, ‘Look man, I am no fucking fool,’ ” Argento said. “But, looking back, I am a fucking fool. And I am still trying to come to grips with what happened.”

The bottom line is that 13 years later we know: We should have printed what we had. How many women might it have prevented from abuse?

One other thing: Matt Damon gave an interview on Tuesday in which he explained the call he made to me at Weinstein’s behest about Lombardo.

The actor and I do not disagree on this. It was a brief call and I did not tell him what my story was about, since it did not concern him. My point was that Harvey Weinstein was using any tool he could — including getting his celebrity friends to vouch for Lombardo — to get me to back off the story.

It did not work and Matt Damon is not responsible in any way for how the story turned out. So let’s just leave him alone, please.

For those who want the full background, here’s the original post.