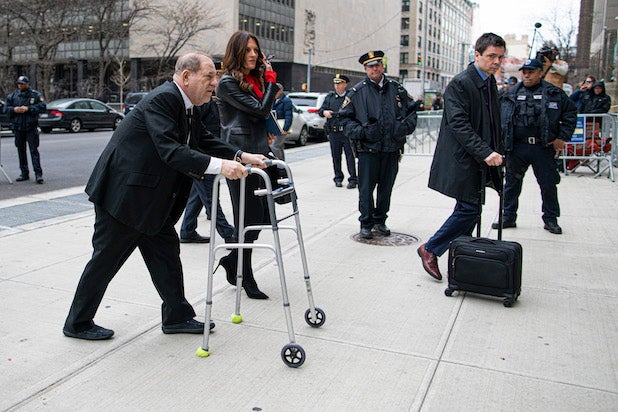 Approximately 140 prospective jurors appeared in court on Thursday morning for voir dire. But during the afternoon session, Assistant District Attorney Joan Illuzzi accused the defense of “systematically eliminating every young white female on this jury.” (Of the seven selected jurors, there are three white men, one black man, two black women, and one Afro-Latina woman.)

The defense denied the accusation and pointed out how they had stricken six prospective jurors who were men. “This is not some conspiracy against the state,” Donna Rotunno, one of Weinstein’s lead attorneys, said.

The judge agreed with the defense and said the strikes were justified.

Also on Thursday, model Gigi Hadid was dismissed based on responses she had given in a prescreening questionnaire — which came as no surprise to legal observers. Hadid was one of roughly 60 other people who were dismissed as jurors on Thursday.

In addition, one prospective juror was called back into Justice James Burke’s courtroom after he was caught tweeting about the trial while still a part of the jury pool. Burke must return, with an attorney, on March 10 to “show cause” as to why the judge should not hold him in contempt. If held in contempt, the prospective juror could face a fine and up to 30 days in jail.

Opening statements are expected to begin next Wednesday.

For the record: This article was updated to include the two additional jurors who were selected in the afternoon.