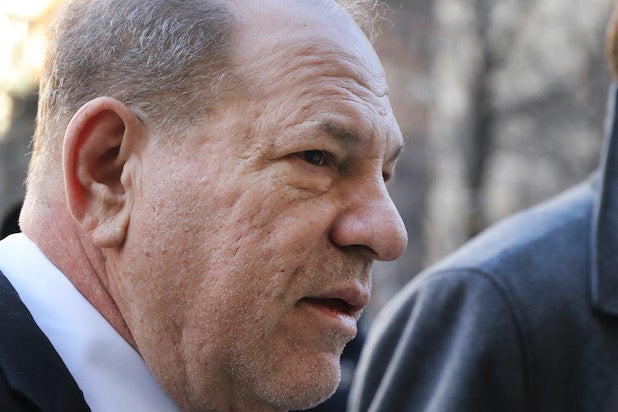 Harvey Weinstein arrives at a Manhattan court house for the first day of opening statements at his trial on January 22, 2020 in New York City. (Spencer Platt / Getty Images)

More than a year after the New York district attorney’s office arrested and charged Harvey Weinstein for sex crimes, lawyers for the defense and prosecution appeared in court on Wednesday to paint their own picture of Harvey Weinstein.

Wednesday’s proceedings marked the beginning of what has been — and will likely continue to be — a contentious trial lasting several months. After the jury of 12 people and three alternates was sworn in, the prosecution launched into detailed retellings of how Annabella Sciorra, Mimi Haleyi, Jessica Mann, Dawn Dunning, Tarale Wulff, and Lauren Young — the six women expected to testify in the trial — say Weinstein assaulted them. While the prosecution’s charges hinge on the accounts of Haleyi and Mann (who was previously unnamed before Wednesday’s proceedings) the testimonies from the other four women could help the state make the case that Weinstein was a predator.

“During this trial, you are going to learn that the defendant is a savvy New York City businessman, that he was a famous and powerful Hollywood producer, living a lavish lifestyle that most of us will never know and will come to learn, most of us will not want to know,” Assistant District Attorney Meghan Hast said. “But the evidence both from the witness stand and from exhibits admitted during the trial will also show that that man was a sexual predator and a rapist.”

As Hast began sharing graphic details of the alleged assaults, she projected photographs onto a large TV screen in the courtroom of Weinstein in his heyday, standing before hundreds of reporters on a red carpet and posing with former President Bill Clinton, contrasted with photos of the women who will be testifying in the coming weeks. Included in Hast’s retellings were details about violent behavior and a pervasive sense of fear that the women felt.

“Ladies and gentlemen, ultimately this trial is about the defendant’s desire for conquest. And it is for his complete lack of empathy that he must be held accountable,” Hast said near the end of her opening.

But roughly two hours later, when Weinstein’s attorney Damon Cheronis stood to give his side’s opening, Cheronis quickly criticized the prosecution for calling his client a “predator” and “rapist.”

“What we just heard from Ms. Hast was truly a narrative that was spun to explain things that are inexplicable,” he said. “Everything that Ms. Hast just told you is not evidence. None of it. She wasn’t there, she doesn’t know. She’s relying on what [the women] told her.”

Cheronis then began to retell the accounts of the women from a different angle, one which depicted Weinstein as a man having consensual relationships with his accusers and not a “master manipulator.”

To do so, Cheronis also used a PowerPoint and quoted from seemingly friendly emails sent by some of the witnesses against Weinstein, suggesting that the messages indicated the encounters did not amount to sexual assault. He also brought up the timelines of each woman’s account and questioned the sequence of events that occurred after the alleged assaults, including instances where the witnesses reached out to Weinstein for further contact.

“At some point during the course of this trial,” Cheronis said to the jury, “you’re going to say, ‘Oh my God, Harvey Weinstein is innocent.'”

A black-suited Weinstein entered the packed courtroom around 9:17 a.m. ET without the aid of a walker. He was propped up by his publicist and headed straight for the defense’s table in the front of the courtroom. Observing his movements were over 70 members of the press and rows of attorneys, including Gloria Allred and Douglas Wigdor, who are representing some of the witnesses in the case, and Manhattan District Attorney Cy Vance.

But when the jury entered, the filled courtroom quieted down, marking the start of a day of proceedings that would be a confluence of spectacle and solemnity.

Weinstein faces five felony counts for predatory sexual assault and first- and third-degree rape; if found guilty of the former charge, he faces a life sentence. He has pleaded not guilty.