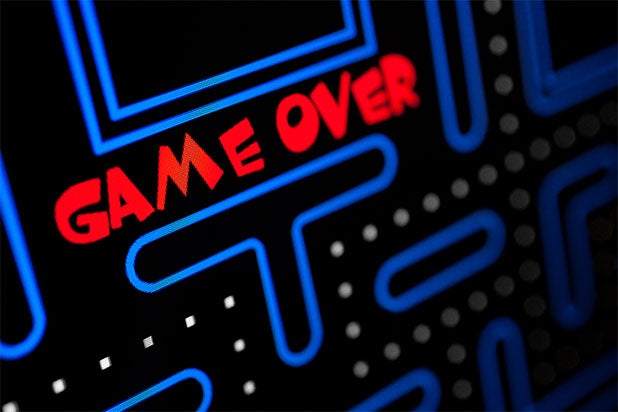 In our last post, we looked at the eSports audience and the key online streaming platforms used to consume live gaming content. Now, let’s take a look at what traditional linear TV (where the viewer has to watch a scheduled TV program at a particular time) is doing to offer live gaming viewing and win some of those consumers.

Historically, eSports did not find much success on linear television. In the mid-2000s, a number of leagues, such as the Cyberathlete Professional League (CPL) and Major League Gaming (MLG), struck deals with pay-TV networks to air a limited set of specials and episodes showcasing finals. But the CPL ultimately disappeared due to non-payment of prizes, and MLG moved away from carriage on USA and G4 toward online streaming platforms.

Since then, online streaming services like Twitch have boomed, with a format that better fits the genre. With the boom, advertisers are looking to eSports to reach millennial consumers who are increasingly digital and abandoning traditional TV platforms.

In the past few years, TV companies have upped their investments in eSports (see figure below). 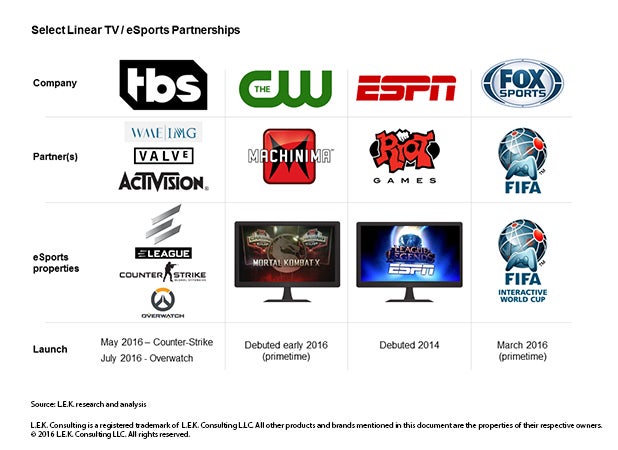 TBS worked with WME-IMG to launch its multi-title ELEAGUE in May 2016. It debuted with Valve’s “Counter-Strike,” with matches airing on both TBS and Twitch. The move paid off — the first season of ELEAGUE drew 19 million viewers on TBS, including 3.4 million incremental viewers who had not previously tuned into the channel.

Following this success, TBS announced in September 2016 that it would broadcast a second season of ELEAGUE, focusing on “Counter-Strike.” Additionally, the channel is adding more live-gaming programming by creating a tournament for Activision’s “Overwatch”; finals will be broadcast live on TBS and Twitch on September 30.

Cable, telecom and satellite companies are also entering the space, albeit more tentatively. Since 2015, DirecTV has offered fan access to two days of video from BlizzCon (Blizzard Entertainment’s convention). Meanwhile, Verizon is including a “SportsCenter”-like eSports show as part of its Go90 OTT service.

Video game companies are also beefing up their internal TV capabilities. Activision Blizzard has announced ambitious plans: CEO Bobby Kotick has stated that he intends to build the ESPN of eSports, focused on premium content. The company has hired Steve Bornstein, a former CEO of ESPN, to run its eSports division.

Despite these developments, there is still plenty of white space out there, with many top eSports properties not yet benefiting from linear TV carriage (see figure below). 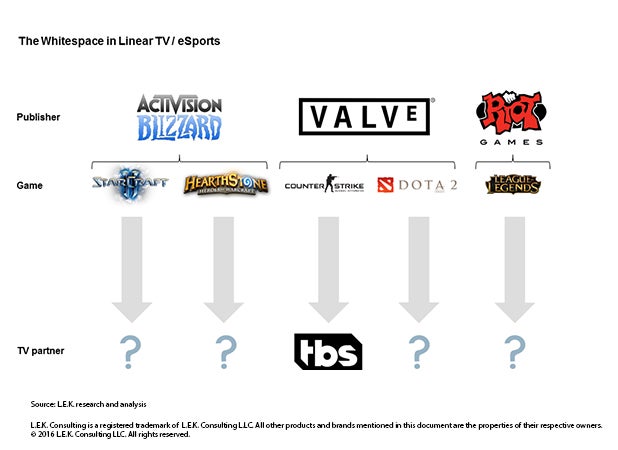 TBS’ early success with ELEAGUE will likely draw more traditional media companies into the fray. This represents an intriguing opportunity, as blue-chip brands seek to reach core millennial consumers who are tuning into eSports.

So what does the future hold for eSports — is this a momentary bubble, or will eSports continue to grow? We’ll take a look at this key question in our next post.

This is Part 4 in a series on eSports by Dan Schechter, Gil Moran and Francesco Di Ianni from L.E.K. Consulting’s Media & Entertainment consulting practice.