Hate-watching is a real phenomenon, at least according to a new analysis of Twitter behavior.

A new study released by the analytics company Canvs examined the correlation between the emotional reaction of TV viewers on Twitter and the show’s viewership. The results show that hate is one of the most powerful factors in driving audiences to watch a show.

Using TV-related Twitter data from Nielsen, Canvs studied audience reactions to nearly six thousand episodes of TV across genres and networks — including HBO, home of hits such as “Game of Thrones,” as well as broadcast networks like CBS and ABC. In total, 5,709 episodes of 431 comedy, reality and drama series that aired between January 2014 and June 2015 were included in the study.

Twitter reactions were sorted into emotional categories such as “hate,” “love,” “funny” and “beautiful.” The response was then measured against the viewership of the following episode.

Also Read: 'Game of Thrones' Shockers Leave Fans With So Much to Talk About

The study also found that “funny” is not the most significant factor in comedy viewership. “Love” and “beautiful” are the biggest indicators of whether viewership will go up or down in the next episode. 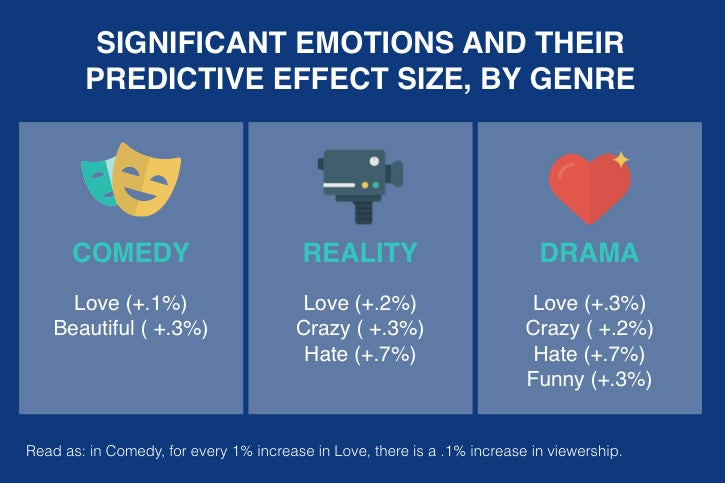 25 Worst Dads in Film and TV, From Homer Simpson to Darth Vader (Photos)