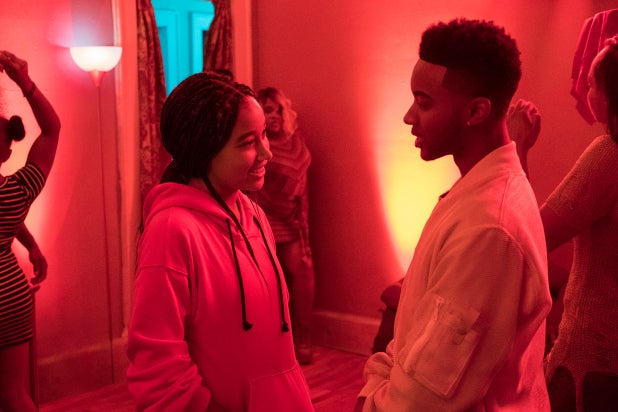 In 2015, The New York Times posted a video called “A Conversation with My Black Son,” which discusses the fact that black parents in this country have to talk to their children about what to do and how to act when pulled over by the police. “The Hate U Give” begins with that same talk, as Maverick (Russell Hornsby, “Fences”) and Lisa Carter (Regina Hall) explain to their tween son and daughter that they are to put their hands on the dashboard, fingers spread, and answer all of the officer’s questions politely and directly.

It’s very practical advice when, several years later, teenage Starr (Amandla Stenberg) sees a childhood friend shot and killed by a cop when the policeman mistakes the victim’s hairbrush for a gun. But even before this tragedy occurs, that opening scene makes its presence felt throughout the entire film. “The Hate U Give,” adapted by Audrey Wells (“Under the Tuscan Sun”) from the popular YA novel by Angie Thomas, often has the trappings of a teen movie — stolen kisses, prom dates — but the threat of random, uncontrolled violence at the hands of the police weighs down on everything.

That opening speech put a knot in my stomach for the entire running time of the film, and while that knot is a pale approximation of the ongoing PTSD many black Americans experience as a result of racial discrimination, the film’s narrative power is such that what could have been merely a message movie is something larger, an empathy-driven family drama about people living in a fractured country that is all too recognizable.

Watch Video: Amandla Stenberg Gets Woke in 'The Hate U Give' First Trailer

The shooting affects Starr in many ways, mainly by forcing a collision between the two worlds she travels through by constant code-switching. At her exclusive (and mostly white) prep school, she’s “Starr 2.0,” shrugging off casual racism, being overly pleasant and amenable, and never using any slang that a rapper would. At home in her working-class black neighborhood, she hides in plain sight in a hoodie and has no real intimate friends outside her family, although she does hang out with Kenya (Dominique Fishback, “The Deuce”), the half-sister of Starr’s half-brother Seven (Lamar Johnson, “Kings”).

Kenya takes Starr to a party where she runs into her old pal Khalil (Algee Smith, “Detroit”). As children, Starr and Khalil pretended to be “Harry Potter” characters, but now he’s supporting his addicted mother and cancer-stricken grandma by dealing drugs for King (Anthony Mackie), a local crime lord. When a fight breaks out at the party, Khalil whisks Starr out for a drive, but when they get pulled over and Khalil gets shot, she’s the one witness to the murder. Does she testify, jeopardizing her best-little-girl-in-the-world status at school and drawing King’s ire upon her and her family? Or does she remain quiet, allowing Khalil to be just another unarmed black teenager cut down in his prime without consequence?

This isn’t a “who do I take to the prom” dilemma, and director George Tillman Jr. (“Notorious,” “Soul Food”) understands the ramifications of Starr’s plight, from police harassment of her family to the fact that her school friends (including K.J. Apa of “Riverdale” as her boyfriend) don’t always know what to say or how to respond to the shooting. (At one point, her classmates stage a walkout to protest police violence, but they mainly treat it as an opportunity to cut class.)

And while so many movies about race operate in a way to make as many viewers as comfortable as possible — usually by setting the story safely in the past, and presenting racism as the acts of select mean people rather than the result of endemic, structural, institutionalized oppression — “The Hate U Give” doesn’t provide that level of comfort. (Apa’s well-meaning character, while mocked for actually saying “I don’t see color,” is ultimately presented as not beyond redemption.)

Also Read: Kian Lawley Fired From Fox's 'The Hate U Give' After YouTuber's N-Word-Laced Clip Surfaces

“The Hate U Give” is one of the most emotional viewing experiences I’ve had in a long while, but it’s by no means a perfect movie. The big climax is overplayed, and the movie wants to eat its cake and have it too when it comes to the police and the prison system, opting for a compromise stance that will probably please neither the #BlueLivesMatter crowd nor those calling for more radical reforms of the criminal justice system.

These elements are far overshadowed by the film’s many triumphs, from the unilaterally excellent cast — Stenberg, Hall and Hornsby are heartbreaking, and Smith charms us with a character we only just get to know — to the sense of zeitgeist that permeates every frame. We’re universes away from the sanitized suburbia of so many adolescent dramas; this feels like the world outside our windows, with the same stakes and dangers.

This certainly isn’t the first movie to tackle the subject of police shootings; in recent years, there have been noteworthy narratives (“Fruitvale Station,” “Monsters and Men”) and hard-hitting documentaries (“Whose Streets,” “13th”) on the subject. But “The Hate U Give” is opening on more screens, and aiming younger, than anything that’s come before it. It’s powerful, provocative and devastating, blending the incisive power of dramatic emotion with the immediacy of the evening news.