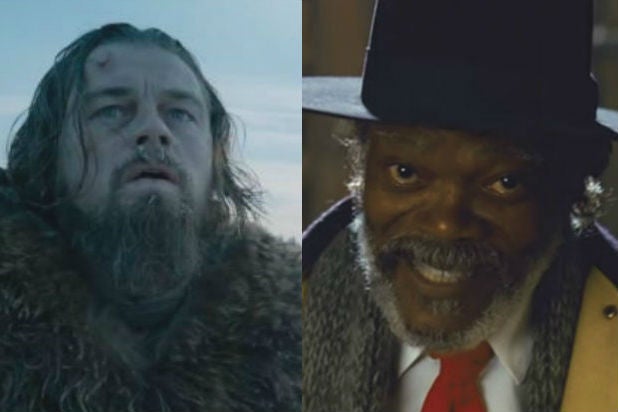 Hollywood only has itself to blame for two highly-anticipated unreleased movies hitting piracy websites on Sunday, multiple insiders told TheWrap.

Quentin Tarantino‘s “The Hateful Eight” and Alejandro Iñárritu’s “The Revenant” have been illegally downloaded to over 1.3 million computers in the past 24 hours, according to piracy analysts Excipio, though neither film hits theaters until Christmas Day.

Awards season DVDS known as “screeners,” sent to Hollywood guilds and voting members like those of the motion picture academy and Screen Actors Guild, were to blame for the copies circulating online, the report suggested.

“They’re sending out DVDs to thousands and thousands of people. If you look at all the guilds and some of the press, the number is over 50,000,” said one top executive who works with the studios and their award season consultants. “To be honest, I’m surprised this kind of piracy is as infrequent as it is.”

A consultant to studios for the Oscars noted the high number of screeners sent around this year, and marveled at the “shitload of big year-end pictures with commercial potential. And ‘The Hateful Eight’ and ‘The Revenant’ … are the kind of movies that people want to pirate. So if those screeners are out there, of course you’re going to get piracy.”

The screeners in questions are rife with warnings on their packaging and on-screen throughout the movies, shouting that duplication or uploading the films is forbidden by federal law. So how do the copies get in the wrong hands?

For starters, individuals get multiple DVDs of the same film regularly — an oversight that is borderline negligent, per the executive.

“Chances are, an Academy member is also a member of BAFTA, or the PGA, and so on. Some people go to the trouble of cross-referencing and making sure they are not double-sending films to one person. Most people don’t,” they said.

Creating that redundancy in itself is a tactic to generate awards buzz, as “the more copies a voter gets, the more they see it, the more likely it is to move to the top of the pile” said the individual, who also suggested voters aren’t directly pirating the content.

“They don’t understand what they’re doing is theft. You loan it to your neighbor and their teenager is the one who puts it online. You have no idea what happens to it when it leaves your hands. The system is too relaxed.”

Another factor in piracy is anticipation. “Hateful Eight” distributor The Weinstein Company is no stranger to the award circuit, but their bloody Tarantino Western was kept under unusually tight wraps — which some think fuelled a demand for illegal copies.

“‘Hateful’ did not get the expanded mailer other movies like ‘Carol’ did, they were really encouraging voters and press to come and see it in a theater,” a Weinstein insider told TheWrap, who added a thorough investigation is underway for the party responsible for the leak.

In regards to legal consequences, a representative for the Motion Picture Association of America did not immediately return TheWrap’s request for comment.

Piracy may result in financial loss, and make the industry at large red in the face in this case, but the executive wondered if the digital theft truly affects the vast market for these types of films.

As awards campaigning hits full stride, TheWrap tours events packed with hopefuls on the road to the Dolby Theatre on Feb. 28, 2016

The Gotham Awards and Academy screenings fired up the circuit immediately in the first week of December.