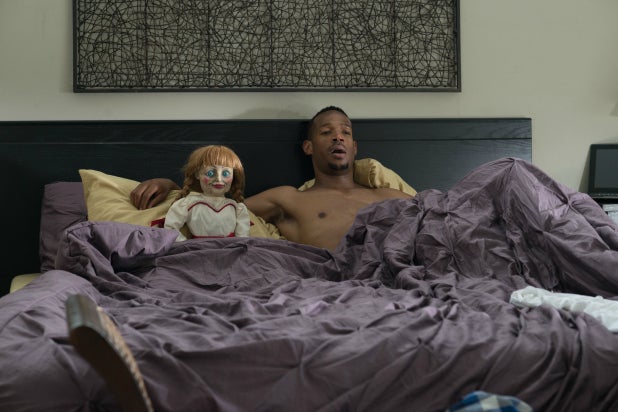 If “A Haunted House 2” is a step up from the previous go-round, it’s either because a slightly more talented crew of comic actors are being asked to waste their time or because 2013 offered a better crop of horror films (“The Conjuring,” “Sinister,” etc.) to be lazily parodied.

In any event, calling this one an improvement is like saying that being kicked in the shin is better than being punched in the stomach. Either way, it hurts.

Marlon Wayans returns as Malcolm, moving into yet another dicey piece of real estate with yet another lunatic shrew — the only kind of woman movies like this know how to portray. This time, it’s Megan (Jaime Pressly, too good for this material), who brings along daughter Becky (Ashley Rickards of MTV’s “Awkward,” way too good for this material) and son Wyatt (Steele Stebbins). Becky sleeps around, while Wyatt has an imaginary friend who drinks vodka and talks gangsta. Isn’t that hilarious?

Becky happens upon a mysterious wooden box (as in “The Possession”), Megan finds a creepy doll (“The Conjuring”), and Malcolm happens upon a cache of disturbing home movies in the attic (“Sinister”). And just like in the “Paranormal Activity” movies, there are cameras everywhere, and the film is divided into chapters like “Night No. 4” and so on.

Get it? Because, like, it’s just like those other movies that you saw! And you recognize the reference! So it’s funny!

Throw in Missi Pyle (way, way too good for this material) and Hayes MacArthur as married ghostbusters, and Gabriel Iglesias as the Mexican neighbor (who indulges a lot of “it’s not racist if we’re commenting on racism” wisecracks), and you’ve got … well, you’ve got another “A Haunted House,” a movie that thinks that sex, drugs and going to the bathroom are so inherently funny that all you have to do is show them without actually thinking up something resembling a joke.

Wayans obviously figured out that the one solid laugh from the first movie was the sight of him having passionate sex with stuffed animals, so he and returning co-writer Rick Alvarez recycle that bit, only this time Wayans has sex with that unnerving doll from “The Conjuring.” And yes, it’s still amusing, but it’s also still about the only truly outrageous or hilarious thing the movie has to offer.

Instead, we get the usual parade of topical movie references, with a liberal sprinkling of anti-women and anti-gay barbs throughout. Misogyny and homophobia are the fallback positions of Wayans comedies dating at least as far back as “Mo’ Money,” and it’s a family habit that Marlon doesn’t seem interested in breaking.

There’s a throwaway gag at one point about how the “Scary Movie” franchise isn’t funny anymore since the Wayans left. That’s actually true, but the “Haunted House” movies aren’t making a case that Marlon and his siblings could do any better.