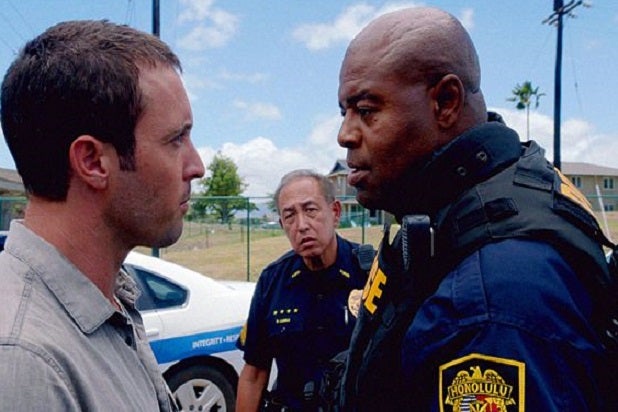 Get ready for a lot more Chi McBride on “Hawaii Five-0.”

The “Boston Public” alum has been upped to a series regular on CBS’s revamp of “Hawaii Five-0,” the nework said Thursday.

McBride, who debuted on the series during its Season 4 premiere in September and has appeared in a handful of episodes, plays Captain Grover, who recently moved his family from Chicago to Oahu and heads up the island’s SWAT team.

McBride said that he’s gratified to be working further with CBS, which counted him among the stars on its short-lived drama “Golden Boy” earlier this year.

“Well, I know this sounds corny, but the only thing I ever wanted in my career was to be on CBS, the home of my idol Jackie Gleason,” McBride said. “I finally made it to the Tiffany Network on ‘Golden Boy,’ shooting scenes on the same stage where ‘The Honeymooners’ was filmed. CBS graciously invited me to be a member of the cast of ‘Hawaii Five-0,’ and it’s been wonderful. The cast, crew and production have been so welcoming to me, and so my love affair with CBS continues.”

Series executive producer Peter Lenkov said that it was evident that McBride’s portrayal of Grover was “something special” from the beginning of his involvement with the show.

“After his first guest spot, we knew we had something special here with Chi playing Captain Lou Grover,” Lenkov said. “He just fit seamlessly into the fabric of ‘Hawaii Five-0’ and viewers are enjoying the spirited, if sometimes antagonistic, interaction between him and McGarrett (played by Alex O’Loughlin). We are so thrilled to welcome Chi into our Ohana (family).”