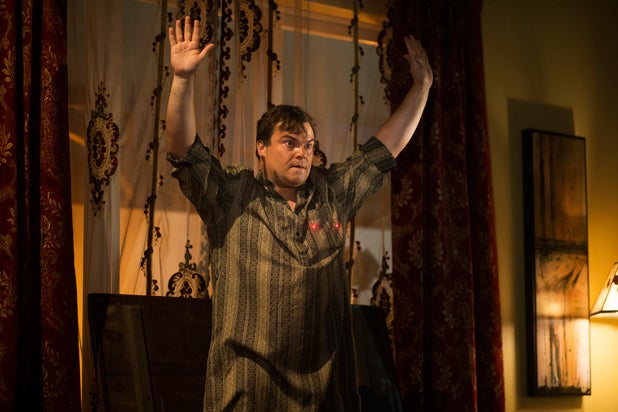 HBO’s new series “The Brink” is a dark comedy set in the world of U.S. government and foreign affairs. Creators/executive producers Roberto Benabib (“Weeds”) and Kim Benabib skewer those who vie, lust and live for power. With a strong cast led by Tim Robbins, Jack Black, Pablo Schreiber and Aasif Mandvi, “The Brink” aims to be closer in tone to “Dr. Strangelove” than “The West Wing,” and that bodes well for the rest of the season.

As “The Brink” opens, a political crisis unfolds in Pakistan. The pilot episode examines that situation’s effect on three men: Secretary of State Walter Larson (Robbins), low-level State Department officer Alex Talbot (Black) and Navy fighter pilot Zeke Tilson (Schreiber, most recently seen as “Orange Is the New Black’s” Pornstache), who must navigate through the chaos in order to stave off another World War.

Mandvi stars as Alex’s driver Rafiq, who, in a moment of crisis, takes Alex to his family’s home in order to protect them both. Esai Morales portrays POTUS and Geoff Pierson plays the secretary of Defense, who is always in hawkish opposition to Walter Larson.

In the course of the first episode, the highest level D.C. government powers debate launching an attack on the new leader of Pakistan, while Alex Talbot finds valuable information about the new and unbalanced leader in Rafiq’s family home. He also finds he’s completely captivated by Rafiq’s sister, who Rafiq warns him away from under threat of death.

Meanwhile, fighter pilot Tilson aka Z-Pack is stressed out as he takes off for his next mission, because he needs his ex-wife to replenish the supply of prescription drugs he’s been selling to his fellow soldiers at the base. Dosing himself and his co-pilot with what he believes is Xanax, he realizes it’s not Xanax as they fly into the heat of battle. Their long strange trip is just beginning.

Director Jay Roach (“Game Change,” “Meet the Parents”) weaves the stories together seamlessly while moving back and forth between the main characters in D.C. and Pakistan. The dialogue is smart, biting and sporadically funny as it convincingly argues that its strange fiction is truth and turns the wartime stuff of our nightmares into the blackest of comedy.

Black delivers what may be his most subtle performance to date, but with just the right amount of buffoonery to convince us that Alex Talbot is not the guy for any remotely important State Department job. Robbins is on fire as a lust-crazed secretary of State who can pretend he’s sober at the drop of a hat, so that he can speak intelligently in the Situation Room with POTUS.

Mandvi provides gravity as Rafiq, who, for instance, realizes the true danger in the weeknight jaunt to buy weed that Alex cajoles him into. The scenes with Rafiq’s family are also sharply written and acted, as the family quickly gets a read on Alex and tries to figure out how to avoid winding up in a Pakistani jail.

“The Brink” isn’t a big, noisy comedy, and airing after “Ballers” may not be the best lead-in, but if you like your comedy with a shot of bitter and twisted, add this to your summer viewing roster.

Also Read: The 'True Detective' Effect: Which Season 2 Star Is Most Primed for a McConaissance

Jerry Weintraub, Roberto Benabib and Roach are executive producers on the 10-episode series. Robbins and Black are producers, and Mandvi is a co-producer.

"American Horror Story: Murder House": The freshman installment of Ryan Murphy's FX anthology series introduced a new method of TV storytelling in 2011 -- and scared the bejesus out of viewers in the process.
View In Gallery
View In Gallery