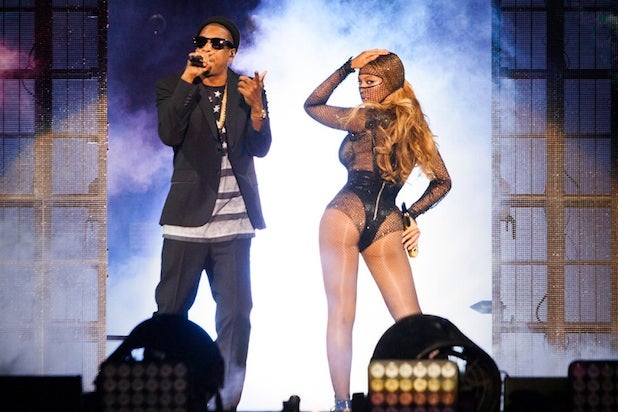 Twitter was on fire Saturday night while HBO aired Beyonce and husband Jay Z’s two-hour concert documentary of their “On the Run Tour.”

Featuring the superstars in their first collaborative tour – and their first HBO concert event – the special was taped on Sept. 12 and 13 at Stade de France in Paris during the only international leg of their recent tour.

Taking turns on stage, Beyonce made several makeup and costume changes throughout the concert, each outfit inspiring their own lot of Twitter reactions.

Then, there was the music. The special included performances of more than 40 songs, including “Crazy In Love,” “Drunk in Love,” “Girls,” a performance of “Flawless” with rapper Nicki Minaj and, of course, a performance of the duo’s “03 Bonnie and Clyde.” Beyonce also did a cover of Lauryn Hill’s “Ex-Factor,” which became a highlight of the night.

The couple have been alluding to the 1930s bank-robbing couple, Bonnie Parker and Clyde Barrow, for years now — at least since Beyonce lent her vocals to 2002 Jay Z single bearing the robbers’ names when the couple had been dating for about a year already. It is an “us against the world” imagery that surely makes a point as divorce reports swirl around them.

Here is a selection of TheWrap’s favorite tweets about the concert special:

The volume on my tv is so disrespectful right now. #OnTheRunTourHBO

Only a queen can summon you out by your government name: ONIKA! #OntheRun #FlawlessRemix pic.twitter.com/vvqTSXOkSM

this woman is every damn thing in the world & i just can’t take her. #OnTheRunTourHBO

my favorite rapper is 65 years old & on my tv right now with a leather vest on. I quit life. #OnTheRunTourHBO

No shade jay-z is a bathroom break for me #OnTheRunTourHBO

.@guillermodiazyo cameo on #OnTheRunTourHBO! Yo B, that boy has Olivia Pope & Beyonce on his team! That's a badass. #watchyourback #Scandal

Song Cry is one of my favorites, Jay is gonna make cry right now this is too much

Beyonce's legs. It's just not even fair!!! #OTRHBO #OTR #OnTheRunHBO

Jay be in his room in between his sets watching damn games, I'm like dude, you could change your tee shirt #OTRHBO

On tour around the world with the man you love and your baby girl. That's living life. #OnTheRunTourHBO

Now was somebody saying something about a divorce? #OnTheRunTourHBO oh. Right….

I want a love that inspires others. Don't wanna be forever young. Just forever in love. The Carters, I salute you. #OnTheRunTourHBO