With a stoner’s fantasy buffet at their side — Golden Grahams, Cocoa Puffs, and a mountain of Krispie Kreme donuts — Judd Apatow, Pete Holmes, and Artie Lange introduced their new HBO comedy series at a premiere screening in Hollywood this week.

“I would stay longer, but my ankle bracelet would go off,” Lange, a New York based comic who has publicly battled substance abuse, joked of his rare west coast appearance at the Avalon on Wednesday. 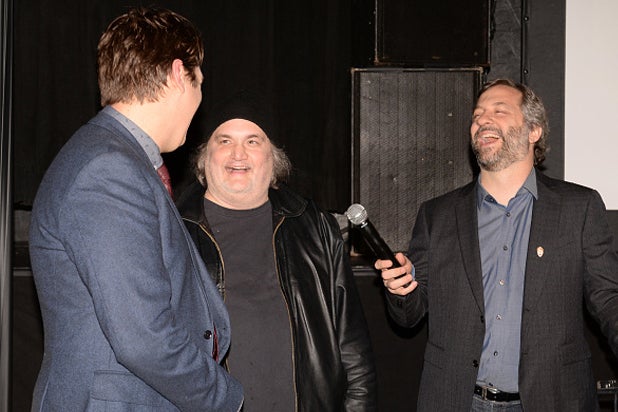 (Watch Apatow, Lange, and Holmes’ introductions in the 90-second video above.)

HBO had no problem getting several hundred guests to “stay longer” at the screening and party. In addition to the sugar cereals, the cabaret style screening turned in to an afterparty as soon as the credits rolled.

“Crashing” tells the tragicomic story of Pete Holmes, playing himself, as he tries to recover from walking in on his wife having an affair. With the assistance of real-life comics playing themselves, whose characters let Holmes crash on their couches and drive them to gigs, he tries to unwind the tailspin of his life while suffering the humiliation of the lowest rungs of the New York City stand-up scene.

For Apatow who produces, writes, and directed the premiere episode, it marks the second straight Sunday night in which he has an HBO comedy debut. (“Girls” began its final season last Sunday.)

“Judd Apatow, I owe you everything,” Holmes said. “I’ll pay you in very small increments over many years.”