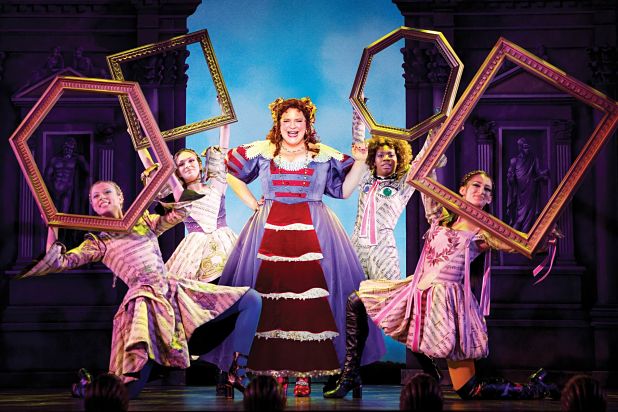 Sir Philip Sidney does not rate a bio in the Playbill for the new musical “Head Over Heels,” even though his name in the credits lands between the Go-Go’s and book writer Jeff Whitty, who also receives a “conceived by” credit. It’s weirdly impressive that Whitty of “Avenue Q” fame dug beyond the usual Elizabethan suspects to find a 1640 play and fashioned a jukebox musical around it, using the songs of the pioneering all-girl pop-rock band. “Head over Heels” opened Thursday at the Hudson Theatre.

Sidney’s “The Arcadia” is no “As You Like It” or “Much Ado About Nothing,” but under Michael Mayer’s direction of Whitty’s book (much “adapted by” James Magruder), it’s a lot raunchier than anything the Bard wrote. There’s the usual Elizabethan cross-dressing, and it helps that there are no rustics to slow down the action with 500-year-old jokes.

A king (Jeremy Kushnier) and queen (Rachel York) escape to the country to avoid the predictions of an oracle (Peppermint). But along the way, one daughter (Bonnie Milligan) falls in love with the viceroy’s daughter (Taylor Iman Jones) and the other (Alexandra Socha) ends up with a shepherd boy (Andrew Durand).

Since Magruder “adapted” Whitty’s “original book,” it’s too bad he didn’t do a more thorough job of it. What’s spoken on stage is often amusing and sometimes hilarious. But there’s just too much of it. The plot is stupid, so why give so much exposition to get to the Go-Go’s hit tunes, which, in the time-honored tradition of “Mamma Mia!,” have little or nothing to do with the story?

“Head Over Heels” doesn’t really kick up its skirt until the belated arrival of Peppermint in full “Drag Race” glory, which is immensely enhanced by Arianne Phillips’s costumes, Julian Crouch’s sets, Kevin Adams’s lighting, and, of course, the outrageous hair and makeup by Campbell Young Associates.

In the cast, only Durand and Milligan match Peppermint’s energy and snappy delivery of the lethal one-liners. Mayer gives them all an inspired moment on stage. In addition to Peppermint’s super-flamboyant entrance, there’s Milligan’s emotional meltdown, sung to “How Much More,” which finds the actress literally tearing up a bedroom set. She even goes so far as to bite the head off an unsuspecting teddy bear. And Durand nearly ruptures his groin during “Mad About You” when the two moving staircases he has climbed dangerously split apart. The scene is a great send-up of John Tiffany’s overuse of sliding steps in “Harry Potter and the Cursed Child.”

Durand knows how to cross-dress to maximum comic effect, just as the plus-size Milligan knows how to throw her weight around to bring down the house. It’s her Broadway debut and only the third Broadway show for Durand. But there’s no doubt: Milligan and Durand are stars.

The other principals lack their casually anarchic attitude. Peppermint, too, begins to show effort near the end. She’s comfortable with one-liners. Putting three or more sentences together is another matter.

Besides Durand and Mulligan, what really holds the show together and never fails to enthrall is Mayer and choreographer Spencer Liff’s use of an eight-person chorus. Whether playing sultry mermaids or randy sheep, they’re sexy and fun and make incredible use of the always kinetic dance steps. They’re so excellent they need to be credited by name: Amber Ardolino, Yurel Echezarreta, Ari Groover, Tanya Haglund, Gregory Liles, Samantha Pollino, Justin Prescott, and Ricardo A. Zayas. Bravi!