“Heartstopper” is coming back for two additional seasons at Netflix.

On Friday morning, the streamer announced the show had been renewed for Seasons 2 and 3, produced by See-Saw films. Alice Oseman, the graphic novels author and illustrator will return as writer and creator.

In Season 1, “Hearstopper” followed the story of gentle Charlie (Joe Lock) and rugby-loving Nick (Kit Connor), who meet at secondary school. They quickly discover that their unlikely friendship is blossoming into an unexpected romance. Charlie, Nick and their circle of friends must navigate the ever-relatable journey of self discovery and acceptance, supporting each other as they learn to find their most authentic selves. 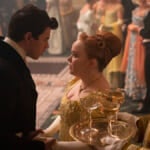 The series, which debuted in April 2022, landed on Netflix’s list of top 10 English-language shows, shortly after its release. It also released the top 10 list in 54 different countries.

Since its premiere, book sales have gone up 1700%.