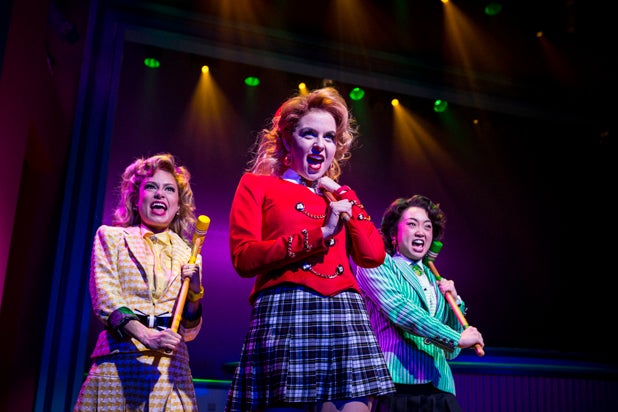 The 1988 movie “Heathers” was prescient in its send-up of teenage bullying and mass murder. But revisiting it today, the cult classic is an unfunny affair, in part because it was so prescient. Today, high school students bump each other off on a nearly weekly basis. But truth be told, Daniel Waters‘s original screenplay is a witless affair.

“Heathers: The Musical,” the new Off Broadway show that opened Monday at the New World Stages, can’t be prescient, but it somehow does manage to be a helluva lot funnier than its source material. Being a stage musical — a very, very broad stage musical — helps make the mass murder go down more easily. Also, director Andy Fickman has followed the “Grease” tradition and cast actors who look to be about ten years older than the characters their playing. And again, being a musical makes certain elements of that dark story really click, especially the three Heathers (Jessica Keenan Wynn, Elle McLemore, Alice Lee) who seem to be operating as one revved-up engine working overtime on all three cylinders.

At first glance, Barrett Wilbert Weed is a strange choice to take over for the winsome Winona Ryder in the role of Veronica Sawyer, the girl who wants to be a Heather and ends up a serial killer instead.

But in act two, her chemistry with the devilishly good Ryan McCartan, taking over for Christian Slate as the crazy guy in school, Jason “D.J.” Dean, helps hold the show together in the anti-climactic second act. Imagine the wound-up, overly fraught Ida Lupino trying to play a distressed teenager, and you have Weed’s Veronica. At age 16, Ryder never went there.

But about that second act, do Kevin Murphy and Laurence O’Keefe, who also wrote the songs, need to take us there? After three splashy murders in act one, can’t J.D. detonate his bomb in a quick coda?

If you’ve got to have a second act, Murphy and O’Keefe pad it nicely with their one catchy pop tune, “Seventeen,” which is reprised for the finale. Fans of O’Keefe’s previous shows “Bat Boy” and “Legally Blonde” will be delighted. For everyone else, the bubble-gum music here is interchangeable with anything from those two shows. With the exception of “Seventeen,” the score never rises to the level of the material Murphy and O’Keefe are parodying.

And about that second act: Writers should know that 90 minutes in the theater is the new three-act play.