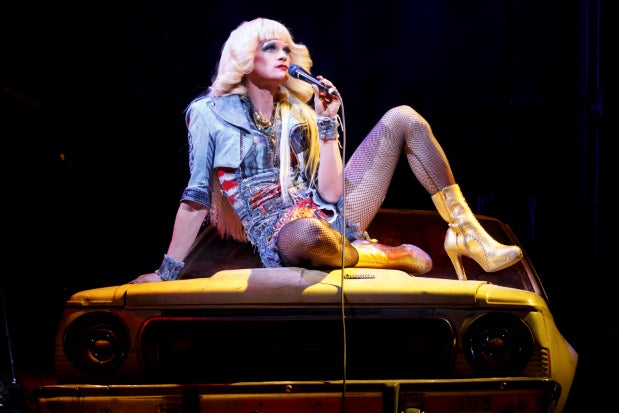 Hedwig, lead singer of the Angry Inch, is forever telling people how he gets down on his knees to give thanks. “Hedwig and the Angry Inch” opened Tuesday on Broadway at the Belasco Theatre, and its creators, John Cameron Mitchell and Stephen Trask, should get down on their four knees to thank star Neil Patrick Harris and director Michael Mayer.

In 1998, when this musical had its world premiere Off Broadway, the story of an East German boy who undergoes a botched operation to become a woman, had a frisson of derring-do naughtiness. The grunginess of a small theater in fin-de-siecle Greenwich Village also helped.

Mayer might have kept a touch of that low-rent tawdriness, but no matter. He goes for the Ziggy Stardust/David Bowie glam that inspires Hedwig, and so turns Mitchell and Trask’s little tuner into a big Broadway extravaganza that burns as hot as a bruised bottom after an especially rough night of S&M sex. (That’s my quote for the ads.)

Mitchell has updated his book. There are now jokes about Christianmingle.com, “Hurt Locker: The Musical” and Hedwig going down on the president of the Shubert Organization. The running gag about Hedwig following a much more successful rock star, who looks just like Neil Patrick Harris, plays effectively. Trask’s jaunty pop songs hold up very well. And Mitchell’s extended monologue of a book feels very, very extended.

You almost never notice. Kevin Adams has provided enough lights for two or three musicals. Benjamin Pearcy’s projection designs on scrim will be copied on every other Broadway stage next season. And there is Harris, first and foremost.

His voice is ideal for the three or four notes of Trask’s songs. He’s edgy, angry, bitchy and also very funny. With his German accent and Brunnhilde helmet of hair, he immediately recalls Marlene Dietrich, then, as Hedwig begins to unravel and disintegrate, he slithers into copying more anonymous blondes of this century, from Nicole Kidman to Cameron Diaz.

Perhaps Mayer goes a bit too far staging the “Wig in a Box” number as a sing-a-long with dancing balls. That’s balls as in testicles. But if Susan Stroman can put giant roasted wienies in “Bullets Over Broadway,” what’s to hold a boy back when it comes to giving the Great White Way its first tea-bagging showstopper?