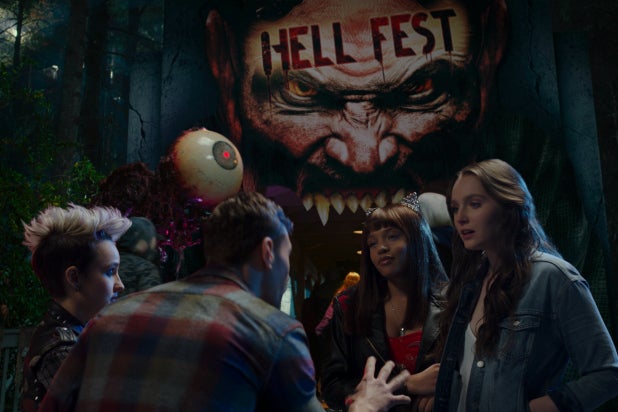 The slasher movie “Hell Fest” captures all the fun and excitement of wandering aimlessly through an amusement park with boring people you don’t like. On the upside, you won’t mind when the bad guy kills them. On the downside, he doesn’t kill them often enough to make the experience interesting.

“Hell Fest” takes place in a horror-themed amusement park, ostensibly a traveling show, but one so gigantic and elaborate that it probably employs hundreds, if not thousands, of people and costs as much to run as Knott’s Berry Farm. It’s an elaborate, scary place full of mazes and monsters and people in masks who jump at you and yell “Boo!”

It’s also the perfect seasonal vacation spot for the film’s serial killer, who wanders the park in a fright mask, looking just like one of the employees. He can kill whoever he wants and all the bystanders will think it’s just part of the show. It’s a disturbing premise for a horror movie, make no mistake.

Also Read: Can the Team Behind 'Girls Trip' Land Another Box Office Hit With 'Night School'?

And make no mistake, it doesn’t work. That’s because the people he’s stalking are Natalie (Amy Forsyth, “Channel Zero”), Brooke (Reign Edwards, “MacGyver”) and Taylor (Bex Taylor-Klaus, “Scream: The TV Series”), three college students with nondescript boyfriends, who have no other purpose than to wander through Hell Fest, take in the sights, and occasionally get murdered. Taylor-Klaus is the only member of the cast who can muster up any energy, and it’s unfortunate that the movie doesn’t give her — or anyone else — anything interesting to say or do.

Indeed, “Hell Fest” rather stubbornly refuses to have any sort of point, even though a myriad of themes try to bubble up to the surface. Taylor is passionate about horror and finds it to be a thrilling aphrodisiac, and she tries to impart a positive attitude about being scared onto Natalie. But Natalie wasn’t that scared in the first place, and she didn’t really have a problem with going to the park, so that falls flat. It’s a film about people who go to an amusement park to play at being scared, and wind up being genuinely frightened for their lives, and it’s not even about fear.

Even the film’s most shocking moment, when Natalie witnesses the killer in the midst of his slaytime and encourages him to kill someone, because she thinks it’s just part of the show, goes nowhere. What could have been a creepy exploration of how feeling superior to fictional horror potentially enables real-life horror is dropped in favor of a prolonged, tedious stalking and a contrived final attack.

The killer demonstrates no meaningful connection to his victims, no motive to speak of, and no personality whatsoever. The filmmakers don’t even give him a distinctive look. He makes his first kill, in the prologue, wearing a Satan mask. It’s a rather obvious allegory, but at least it connects to the title, and to the idea that he’s running loose in his own devil’s playground.

But for the rest of the film he just toddles around in a nondescript “creepy guy” mask and a hoodie. He’s dressed like someone who thinks they’re too cool for Halloween parties but who showed up anyway, in the quickest disguise they could find. That’s hardly the kind of person who would treat Halloween like their own personal murder bacchanal.

It’s almost charming to see a theatrically-released slasher movie that’s this badly written (by six credited writers). Not just the plot; the dialogue is so inane that it almost doubles back and becomes profound. The characters drone on and on about nothing, never saying anything clever or significant. And they drone on so much, on top of each other’s dialogue, that you start to wonder if the filmmakers think they’re doing a Howard Hawks movie. (They’re not.)

See Photos: 37 Fall Movies to Obsess Over, From 'Halloween' to 'Mary Poppins Returns'

“Hell Fest” is one of those rare motion pictures in which the extras look like they’re probably more interesting than the stars. The park is populated with exciting costumes, impassioned revelers, and professional startlers who clearly have more going on in their lives than the kids we’re following instead. We get it, “Hell Fest.” Natalie likes Gavin. Gavin likes Natalie. You don’t need to spend half an hour gossiping about that. It’s not that interesting.

Slasher movies work when they’re about people whose lives are interrupted by a murderer. That’s what makes them scary: the idea that at any time, your normal life could transform into a nightmare. But “Hell Fest” gives us a cast of characters with no outside interests and no personal squabbles. The movie can’t get invested in them, so why should the audience? And why should we care if they live or die when they’ve clearly only been constructed as hollow automata whose sole purpose is to get murdered?

“Hell Fest” isn’t about the characters. It isn’t about a theme. It appears to have been made as an elaborate pitch for a pretty cool Halloween-themed amusement park, which has impressive animatronics and nifty-looking mazes. The film is so impressed with its own creations that the running time is dominated with audience surrogates simply walking around the park, enjoying the rides, doing and saying nothing, and not even being threatened by the movie’s villain for at least half of it.

But if “Hell Fest” was really staged as an elaborate commercial for this fictional park, it still wouldn’t work. Because in order for the plot to work, and for all these murders to happen, this park has to be absolutely awful. The security guards are ineffectual (when you can find one), the fake props are deadly, and the shaved ice vendor uses an icepick that’s easily stolen and wielded by maniacs. Put a string on that icepick! What if you dropped it? And why don’t you have a proper shaved ice machine? This place is expensive as hell, and you cheaped out on the shaved ice?

One thing is for certain: There will be no “Hell Fest 2,” because this park is going to get sued into oblivion by the survivors’ legal team.

“Hell Fest” would have made a better episode of “Defunctland” than an actual, feature-length film. It’s in love with its location and couldn’t care less about the characters. Even the kills are rote disappointments, at least by slasher-enthusiast standards. There’s a scene two-thirds of the way through where the movie gets bored and goes to the bathroom to check its phone. It’s the most sympathetic part.