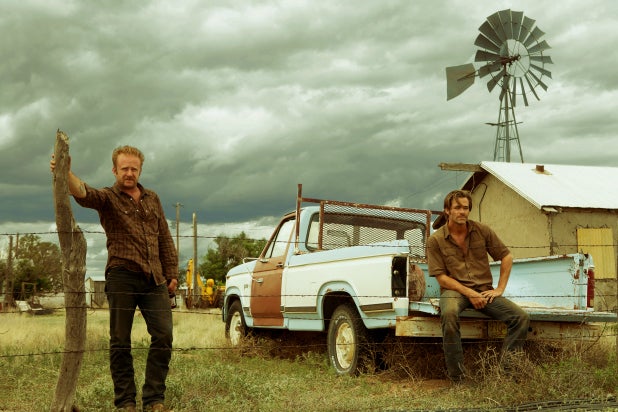 “Hell or High Water” may be the most political of this year’s Academy Award nominees for Best Picture, but it isn’t clearly liberal or conservative.

To some, David Mackenzie’s film will resonate as a 99 Percenter attack on greedy banks. To others, it’s a rebuke to coastal elites who think of its West Texas setting as flyover country. Add in its observations on race relations, and you’ll have a very hard time figuring out where screenwriter Taylor Sheridan leans politically.

In fact, he isn’t sure himself.

“I don’t know what my party is. I don’t think my party exists yet,” screenwriter Taylor Sheridan told TheWrap’s CEO Sharon Waxman during a Q&A following a screening of the film.

Sheridan said if you had to put a label on him, he’d call himself a Libertarian. But when he looked at the Libertarians’ website, he thought to himself, “I don’t believe any of that s—.”

The film opens with the camera circling an empty parking lot in the early morning. The side of a building reads: “3 tours in Iraq but no bailout for people like us.”

The writing is on the wall, but the movie doesn’t explicitly declare who’s to blame.

The film is set in a decidedly Republican state, and the local citizenry are big fans of law and order.

After the film’s first robbery, when Jeff Bridges‘ Texas Ranger, Marcus, arrives at the scene, a tough-looking good ol’ boy in a pickup truck pulls in front of the bank and asks what happened. The man says he’d like to string up the robbers.

It sounds like a tacit endorsement of the kind of vigilante justice seen in the classic films of Hollywood conservative Clint Eastwood — except that our heroes, played by Chris Pine and Ben Foster, are the bank robbers.

It’s also tough to sort out how Sheridan and director David Sheridan feel about guns. Just about everyone in the film is packing heat. But the guns only escalate tense situations.

Then there’s the casual racism of our other hero, Marcus, toward his partner Alberto (Gil Birmingham), who is of Mexican and Native American ancestry. Alberto is understandably offended, and if this movie were set in just about any office with an HR department, Marcus might be in for some long talks about his words. But it’s clear that he’s trying to be funny. He isn’t a malicious racist, and he will miss Alberto dearly when he retires.

“If you look at racism — which is this new catch phrase to where if anyone says anything, you’re labeled as a Nazi — and then you reject the fact because you know you’re not a Nazi, and yet you did say something that was insulting. So where’s the balance in that?” Sheridan said. “Where does it really exist? … The guy who doesn’t think he’s a racist, who thinks he’s color-blind who thinks he supports gender equity and doesn’t even realize he doesn’t understand what that means.”

Everywhere the bank robbers drive, they pass billboards that promise Fast Cash Now or a relief to debts, and they know it’s a lie. Houses, gas stations and once-booming cities are now deserted and foreclosed.

“Green’s still the real evil,” Sheridan said. “That’s the color to worry about.”

“Hell or High Water” is the rare American film that listens to people without trying to judge or assign labels. Hell, that’s rare for anything.