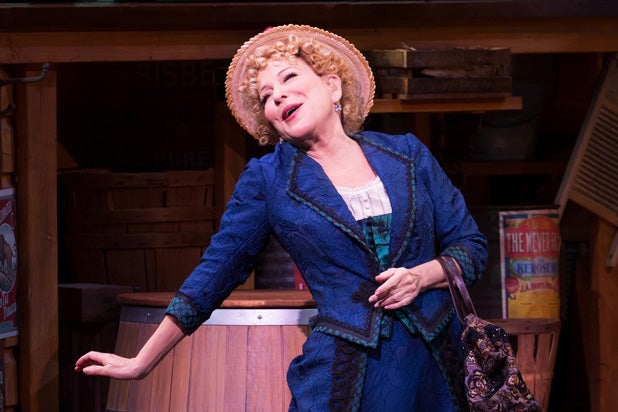 A very famous and talented man of the theater once remarked that “Hello, Dolly!” set the Broadway musical back 20 years. Or maybe he said it was only a 10-year setback. One of the many charms of the new “Dolly!” revival is that the 1964 musical appears to be taking place on Broadway 80 years ago. Director Jerry Zaks and designer Santo Loquasto treat the Michael Stewart and Jerry Herman show as an antique, but cover its frayed seams with a crackerjack cast.

Of course, the big news is the return of Bette Midler. Playing the matchmaker, she does not disappoint fans of her Sophie Tucker-driven Vegas shows. The much greater revelation of this revival, which opened Thursday at the Shubert Theatre, is the offbeat casting of nearly everyone around her, starting with David Hyde Pierce as Dolly Levi’s unwilling suitor.

Horace Vandergelder hails from Yonkers, but Hyde Pierce gives him an Old West flair. You can almost hear the saloon doors flapping whenever he enters or exits the stage. Who knew Hyde Pierce had a “Sly Fox” in him?

The greatest challenge of staging “Hello, Dolly!” is what to do with the dreadful subplot of Horace’s two assistants, Cornelius Hackl (Gavin Creel) and Barnaby Tucker (Taylor Trensch), who take off for New York City to woo a shop owner, Irene Molly (Kate Baldwin), and her assistant, Minnie Fay (Beanie Feldstein).

The 1969 movie version of “Dolly” offers an insipid quartet. Zaks radically tweaks all four characters. Creel and Tucker are a discombobulated Mutt and Jeff, Baldwin is a truly tough cookie, and Feldstein is a Rubenesque Kewpie doll. She looks and behaves precisely like someone named Beanie Feldstein should.

None of these four characters is given a decent line to recite, which might be the reason the musical’s source material, Thornton Wilder’s “The Matchmaker,” is rarely revived. But with such inventive supporting players on stage, the wait for Bette to return never turns into a trial.

With Glenn Close in “Sunset Boulevard” and now Bette Midler in “Hello, Dolly!” theatergoers are giving lessons in true idol worship. The less ease the stars have hitting their notes, the more the audience stands (mid-show) to applaud and cheer. Midler’s best moments (and they’re riotous) are when she’s verbally sparring with Hyde Pierce or eating alone and not saying a word. Less wonderful are Dolly’s prayers to her dead husband. It’s then that we’re reminded that this red-hot Jewish mama is also the actress who gave us such bathetic performances in “The Rose” and “Beaches.”

At the “Dolly” performance reviewed here, the curtain came down in the show’s second scene for about five minutes. An announcement was made that they needed to fix the sound system. Too bad the technicians didn’t take at least 10 minutes to dial back Scott Lehrer’s inflated sound design. This “Dolly” is so over-amplified that there’s almost no relationship between what we’re hearing and the actors on stage. You only know the show isn’t pre-taped when Midler goes up on a line.