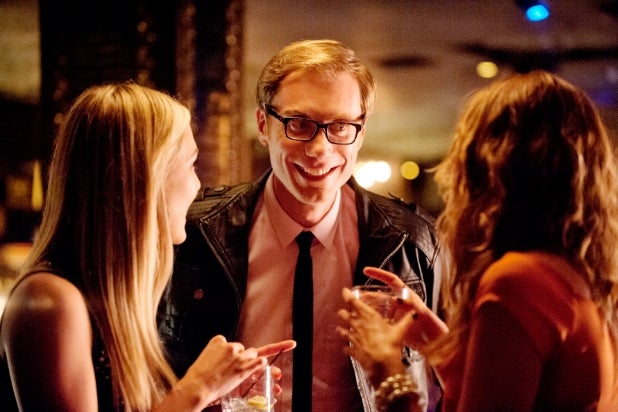 Spoiler Alert: If you have not yet watched “Hello Ladies: The Movie” and do not want to be spoiled, then do not read on.

When life — or HBO — cancels your TV show, make a movie. That was the opportunity British comedian Stephen Merchant was presented with when the pay-TV channel axed his “Hello Ladies” sitcom in January.

Merchant, who stars in his own production as protagonist Stuart Pritchard, told TheWrap that balancing Saturday night’s 80-minute wrap-up special as a standalone piece for those who didn’t watch Season 1 with rewarding fans who had was of the utmost importance.

That said, “Hello Ladies: The Movie” is not exactly what the second season of “Hello Ladies” the sitcom would have been, Merchant copped. The main arc of Pritchard’s on-screen eventual growth, though, was going to happen regardless.

“I always like that idea that you start with somebody who’s kind of a dick — you know, like ‘Groundhog Day’ — and redeem them,” Merchant explained of the character maturation process. “That’s a very satisfying way of telling a story.”

Another key plot piece that stuck around for the re-imagined conclusion was giving the character of Jessica (Christine Woods) an early midlife crisis to deal with. Pritchard’s Hollywood Hills-based tenant and friend quits acting after a humiliating audition for a yogurt commercial, and struggles to find her next life’s calling. She re-enrolls in college and makes some key changes in her personal life, opening the door for the seemingly inevitable “will they” part of Stuart’s and Jessica’s will they/won’t they relationship.

As part of growing Stuart from a wannabe ladies man to a man suited for a lady, Merchant wanted his character to finally make out with — and even have sex with — a girl midway through the feature film. And the king of awkwardness on TV’s most cringe-worthy property wanted the horizontal mambo to be as uncomfortable as humanly possible — so he scrapped his original plan of who Stuart’s on-screen between-the-sheets partner would be.

The first draft of “Hello Ladies: The Movie” saw Stuart sharing a funny sex scene with the beautiful model he kisses on a yacht, Merchant told TheWrap. But instead, the comic raised the emotional stakes, substituting Jessica into an adult-themed scene that couldn’t play out more unbearably and childishly (though also hysterically).

“It’s just something about seeing two people that kind of know each other having sex,” Merchant reasoned. “One of the things I always think is funny about sex — in the real world, when you’re comfortable with someone — there’s something comical about it. It’s quite an odd thing.”

“What’s funny about sex is when you get to know someone well, you’ve relaxed with them, you’ve been yourself with that person — you’ve laughed together, you’ve joked together,” he continued. “She’s seen you when you’ve spilled soup down you. But when you go in the bedroom, you sort of have to slightly take on a role of the sexy people.”

Once he knew the rewritten uneasy sex scene was a go, the self-confessed sucker for a love story knew he had forever answered the rom-com’s main lingering question, and allowed for a more classic romance to seep in between his male and female lead. Still, that call wasn’t all puppies and unicorns and rose petals and love songs — Merchant had a very practical reason for his ultimate decision.

“Also, if you don’t bring them together, people are annoyed,” he concluded.