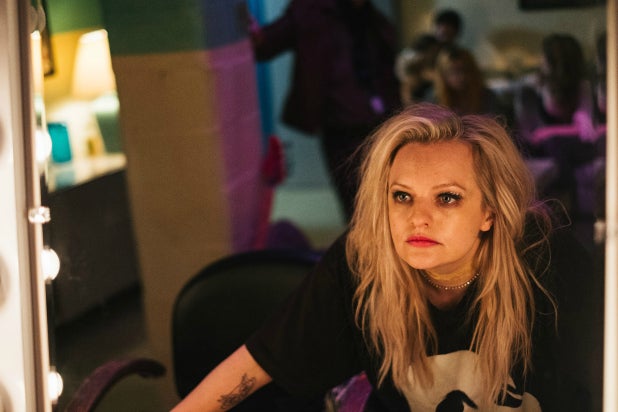 There’s a temptation to call “Her Smell” a greatest-hits compilation of the films of writer-director Alex Ross Perry. After all, it’s got the pitch-black humor of “The Color Wheel,” the narcissism of artists behaving badly from “Listen Up Philip” and the spectacle of Elisabeth Moss as a character spiraling out of control, just like “Queen of Earth.”

There’s more than a little nihilism in these films, delivered with those laughs that get caught in your throat, and Perry couldn’t be less interested in how likable or redeemable his characters might be. Something of a cult filmmaker until now, Perry calls things as he sees them, and he would appear to see them through the bleakest perspective possible.

But this is new material from the challenging auteur, one that reflects a deeper sense of maturity, displayed mainly in the idea of the possibility of redemption. Moss’ Becky Something, at her worst, can be just as monstrous as any of Perry’s previous protagonists — maybe even more so — but hitting bottom, in this case, doesn’t necessarily mean staying there.

Becky is the front-woman of Something She, an all-female rock trio that made it to the top. In interstitial home-movie moments, we see the band celebrating landmarks like their first cover of Spin and their first gold record. The story that unfolds in “Her Smell,” however, takes place after the good times.

In five vignettes, we see Becky and bandmates Ali (Gayle Rankin, “GLOW”) and Marielle (Agyness Deyn) come apart at the seams; they’re playing smaller venues, their European tour has just been canceled, and Becky is in the thrall of a sham shaman, abusing various substances and showing herself to be in no shape to care for her infant daughter. After driving away Ali and Marielle, Becky collaborates with a rising young trio (played by Dylan Gelula, Cara Delevingne and Ashley Benson as rockers who seem to have named themselves after Garbage Pail Kids) but winds up being merely a bump on their own road to stardom.

After the rehab and the lawsuits, Becky starts mending the connections in her life: to her daughter, to Marielle, to her ex-husband (Dan Stevens) and her mother (Virginia Madsen). But when mogul Howard (Eric Stoltz) gets Something She to reunite for a show celebrating the label’s 20th birthday, Becky must face her fears and put it all on the line to get back onstage.

“Her Smell” reflects the fervor and the intensity of what’s going on inside Becky’s head: editor Robert Greene (“Christmas, Again”) and cinematographer Sean Price Williams (“Good Time”) bring a grungy intensity to the film’s early sequences, as Becky spirals out of control in various green rooms and recording studios. It’s not until she chills out that the movie does as well, and by that point, both character and audience could use a breather. (The movie is told in, essentially, five chapters, and both Greene and Williams bring a distinct flavor to each one.)

Naturally, this is Moss’ show, and she makes all the highs and the lows completely engrossing. Show-biz stories like this always inspire speculation as to who the character is “really” supposed to be, and while Moss brings a little bit of Courtney Love-craft to her performance, Becky Something feels like a completely organic and unique individual. At the film’s softest moment, a cleaned-up Becky plays a song on the piano for her daughter, and Moss achieves one of my favorite musical feats – she takes a banal and schmaltzy pop ditty and infuses it with enough soul to give it real meaning. (If you’ve ever seen Sandra Bernhard perform live, you’ve witnessed this magical alchemy.)

Even with this powerful central performance, there’s still a terrific ensemble doing great work, from Deyn as the one person who can have real-talk with Becky, to Madsen (perfectly cast as Elisabeth Moss’ mother) conveying layers of disappointment buried under boosterism, to the exasperated eye-rolls that have already become a trademark for Gelula (“The Unbreakable Kimmy Schmidt”).

“Her Smell” joins a proud pantheon of women-in-rock sagas, although it hews more to the darker extremes of “Ladies and Gentlemen, The Fabulous Stains” than the pop-timism of “Josie and the Pussycats.” Nonetheless, it’s got grit and power, not to mention great fake-band songs by Alicia Bognanno and Anika Pyle. And as a movie about learning to balance youthful creativity and adult responsibilities, it’s leagues better than what Disney did to Perry’s “Christopher Robin” script. Put this one on your playlist.