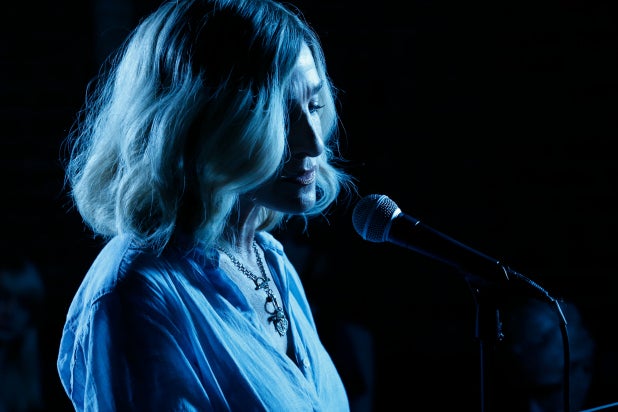 Your response to “Here and Now,” a first narrative film from director Fabien Constant (“Mademoiselle C”), will very much depend on your response to Sarah Jessica Parker as a performer, for this is very much a vehicle for Parker, and it plays into some of her strengths and many of her weaknesses.

“Here and Now,” which screened at festivals under the title “Blue Night,” gets off to a very rocky start in a first sequence set in a hospital where Vivienne Carala (Parker) waits to see a doctor. The first shot is of her agonized eyes in extreme close-up, and the hand-held camera keeps very close to Vivienne. Constant (directing a script by Laura Eason, “House of Cards”) seems to want us to be inside of Vivienne’s head here, but the editing is so jerky that what results is spatially incoherent rather than emotionally involving.

Vivienne is told that she has a brain tumor and only around fourteen months to live if she seeks treatment, and after this diagnosis she wanders the streets of Manhattan in a daze. Vivienne is a singer, like the heroine of Agnès Varda’s French New Wave classic “Cléo from 5 to 7” (1962), but Cléo is a pop singer and Vivienne is supposed to be a respected but struggling jazz vocalist.

Cléo spends most of Varda’s film waiting to hear a medical diagnosis that might be fatal, and so there is built-in suspense in this set-up. Vivienne knows right from the start of “Blue Night” that her days are numbered, and so all we can do is watch her despair as she totters around on her high-heeled, ankle-strap shoes. This is a far less compelling prospect.

Parker’s Vivienne is playing a gig at Birdland, where she once sang to some acclaim 25 years ago. Her career is not what she had hoped it would be, and this comes across in maybe the best scene in “Here and Now,” when Vivienne has to deal with an interviewer who asks about a “broken engagement” and whether this break-up affected her new album.

The record is titled “Third and A,” an address in the East Village where Vivienne once lived. Now she’s in a nice but modest apartment on 49th Street between 2nd and 3rd Avenue, which is where her domineering and very attractive mother Jeanne (Jacqueline Bisset) is waiting for her.

Parker and Bisset make for a convincing mother and daughter in “Here and Now,” for they both have similar searing blue eyes, and they are both uneasy presences on camera. Vivienne finally escapes her mother’s undermining comments after giving her a desperate embrace. As she wanders around outside some more, she encounters a friend named Tessa, played by Renée Zellweger. Tessa is just as uneasy as Vivienne and Jeanne, and she disappears from the film entirely after a brief conversation with Vivienne about raising her young children.

There are times when “Here and Now” resembles one of those meandering, exploratory Elizabeth Taylor movies from the late 1960s and early 1970s, films where she tried to hold on to her glamorous earlier image while attempting to delve into psychic disturbances. Constant has Vivienne walking around a lot in “Blue Night,” and noticing things about people she sees on the streets, but these scenes don’t ever add up to anything.

If they were going to cast Parker as a jazz singer, they should never have had her perform, as she does at a club in “Here and Now.” She sings a new Rufus Wainwright song called “Unfollow the Rules,” and Parker sings it fairly well, but in a musical style that doesn’t bear even a passing resemblance to jazz. If Parker was going to play an esteemed but somewhat unsuccessful singer, surely this role should have been written as a musical-comedy performer who does shows at 54 Below rather than Birdland. (We see one of Vivienne’s albums on the wall of her apartment, and it is called “Subtlety,” a title that might get an unintentional laugh.)

Parker has image problems now that have to do with her extreme success on the TV show “Sex and the City.” She had been a likable child actress and then a charming ingénue, but her Carrie Bradshaw became increasingly unsympathetic while the show itself presented her as a lovable heroine. This disconnect was matched by Parker’s attempt to take on a very glamorous and grand-lady-like image while still holding on to her most girlish mannerisms from her child-star days: the perpetual tilt of her head in conversation with others, the way she is always nervously pushing her hair behind her ears.

“Here and Now” is another miscalculation for Parker because it presents her as an entirely sympathetic heroine and a talented jazz singer, even though Parker is sending us behavioral signals that Vivienne is a flawed and calculating person. (And more likely to belt out “Tomorrow” at Marie’s Crisis rather than trade fours at Birdland.) What Parker really needs to do at this point is to play a spectacularly flawed or even villainous person outright. Only when she stops worrying about being sympathetic will her career get back on track.

Why are you here? Celebrity appearances and connections to modern art range from vague to bona fide to baffling

When you think "Art Basel," Miami Beach's ultra-modern art fair and the constellation of parties that orbited it this weekend (Dec. 1-4), the default visual in your head should be something like those from the opening of the Broad Museum in L.A last year. Like, Jeffrey Koons' iconic balloon dog...