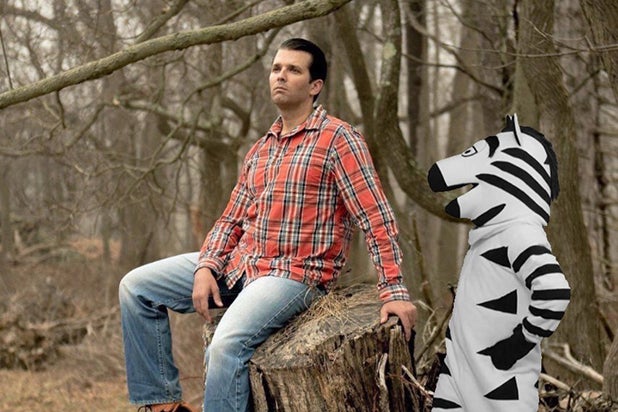 John Oliver’s “Last Week Tonight” has spawned yet another meme.

The host closed out Sunday’s episode of his HBO talk show with a short segment about an initiative in La Paz, Bolivia that uses people dressed up in zebra costumes to help direct traffic and reduce accidents.

“Frankly, I have needed this over the past few months. The news has been hard,” Oliver said during the segment featuring footage of zebras dancing, hugging children and participating in news interviews.

“If zebras can make Bolivian traffic jams better, what else could they help with?” he mused after suggesting that every interview would be made better if one of the people involved were wearing zebra costumes.

Oliver then played clips of a man dressed up as a zebra inserted into the background of Donald Trump’s inauguration, Rachel Maddow’s heavily hyped segment about Trump’s tax returns, and even an emotional scene from “Manchester by the Sea.”

“I think it’s pretty clear, with things in America the way they are now, we need these zebras like never before,” he said.

“Last Week Tonight” followed up the segment by uploading a 23-minute video of the zebra dancing and emoting in front of a green screen. Viewers were encouraged to take the clip and insert the zebra into other “stressful” events from the news.

See some of the best memes below:

John Oliver is right. Everything is better with #justaddzebras. Take #SeanSpicer 's #PressBriefing for an example. pic.twitter.com/3IDwhAz6uE

Zebras are taking over the internet today whether you like it or not. #justaddzebras pic.twitter.com/rev7uJrFJu

Decided to teach myself how to use green screen on iMovie. #JustAddZebras to the meme about the gun-toting son of the racist. pic.twitter.com/6vxFwB5NV0