Billy Crystal and Tiffany Haddish may not be the first on-screen team-up that comes to mind, but we’re glad they did after seeing the first trailer for “Here Today.”

Crystal in this heartwarming comedy and drama plays a comedy writer who is slowly struggling with memory loss and other health issues, and Haddish is the woman whose boyfriend bid just $22 on Crystal in a celebrity auction and got roped into going to lunch with him alone. And as they continue to hang out, even they aren’t quite sure what the nature of their relationship is.

And it’s definitely not sexual either, as Haddish makes perfectly clear after she wakes up in his bed. 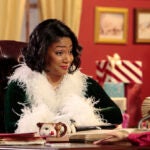 “That this, it didn’t happen. Your little frail body wouldn’t be able to handle all these groceries,” Haddish says to a grinning Crystal. “I’d break your back. Then you’d die. Can’t have that.”

“Here Today” opens in theaters from Sony’s Stage 6 Films on May 7. Check out the trailer here and above.