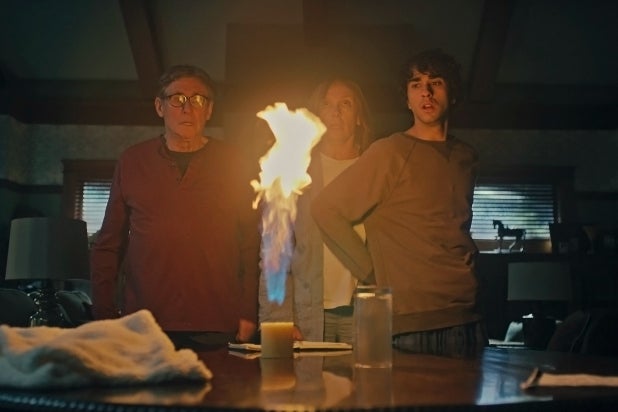 Based on purely anecdotal evidence, I’m predicting that one of the more recurrent arguments among film enthusiasts for summer 2018 will be, “Does the ending of ‘Hereditary’ work?” (With “And what exactly does the end of ‘Hereditary’ mean, anyway?” coming in close second.)

Less likely to cause disagreement will be the idea that “Hereditary” marks a jaw-droppingly impressive feature debut for writer-director Ari Aster. He’s clearly learned from the greats while still making a film that doesn’t entirely look, feel or sound like anyone else’s. With nary a jump scare in sight, Aster has created a moody piece with a delicate but devastating sense of dread.

This is the kind of film best enjoyed with as little foreknowledge as possible, so I’ll keep to the outskirts of the plot: Annie (Toni Collette) has had a longstanding messy relationship with her mother, who has just died. This quotidian tragedy gives way to a deeper one involving her children, high-schooler Peter (Alex Wolff) and tween Charlie (Milly Shapiro, Broadway’s “Matilda”).

At a grief support group, Annie meets Joan (Ann Dowd) — and let’s face it, any movie where someone’s port in a storm is played by Ann Dowd is a movie that’s about to get very dark, which “Hereditary” certainly does. And then it arrives at that ending, which I have had and no doubt will continue to have discussions about. For right now, I’m torn between taking it literally (which means the script winds up in an all-too-familiar place) or not (which seems like an overly fussy way to deal with a powerful drama about a troubled family).

By the end of the summer, I may be joining the chorus that has been unabashedly praising this film ever since its Sundance debut. But even if the climax continues to leave me cold, I’m thrilled that “Hereditary” exists, and I’m heartily endorsing that audiences experience this film in the theater, the better to appreciate that skilled work of its crew.

There’s something about the way that cinematographer Pawel Pogorzelski (“Tragedy Girls”) shoots the film’s Utah locations that make it seem like the story is set anywhere and nowhere all at once, and he uses the red lighting of an indoor heat lamp to very effective ends. The unsettling score by Colin Stetson becomes all the more effective as sound mixer Steven C. Laneri mixes it down, down, down, until it sounds like the music is being played in an apartment beneath the movie theater.

Grace Yun’s production design — from the bleakly cheery dollhouse miniatures that Annie crafts of her own life to one of the cinema’s greatest treehouses ever — creates this world and allows us to get lost in it (and, eventually, want very much to get out).

And while director Aster certainly has his technical ducks in a row, he’s also gifted at working with actors, collaborating with a talented cast as they give some of their finest performances. Collette, always an unpredictable and multifaceted leading lady, has perhaps never been better; Annie wants very much to be a better parent than her own mother was, but finds herself unable to break that particular chain. The actress’ ultimate portrayal of her own family’s dissolution is heartbreaking and intense.

Wolff has specialized in troubled teens who are haunted in one way or another, and he nakedly expresses grief and fear here in a way that’s so un-actorly that it’s almost shocking at first. It’s a level of emotional accessibility that makes you rethink what other actors do in similar situations. Remember what a revelation it was the first time you saw Claire Danes cry like a real person and not like a leading lady? Wolff’s performance here delivers that same kind of jolt.

You could strip away the plot elements that technically make “Hereditary” a horror film, and you’d have an incredibly intense tale of familial implosion, and that’s not to denigrate the idea of horror or to classify this in the ridiculously unnecessary “elevated horror” category. I can’t wait to see what Ari Aster does next, having taken such big chances to such great results in his first movie. And as for that ending, well — I’m sure I’ll be talking about it.