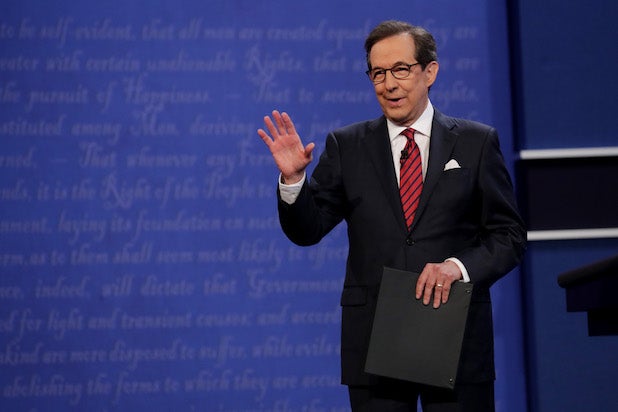 Fox News moderator Chris Wallace drew widespread praise for his handling of the third and final presidential debate, with many viewers praising his firm handling of the candidates’ maneuvering and even shushing the crowd on several occasions.

Hillary Clinton and Donald Trump faced off in the live 90-minute debate from Las Vegas, which happened less than three weeks before Election Day.

The pair clashed over issues ranging from Syrian refugees to Trump’s comments about women to the activities of the Clinton and Trump foundations.

Even Donald Trump, who clashed with the moderators at the second debate, demonstrated respect for Wallace.

Wallace, like moderators in previous debates, warned the crowd at the top of the debate not to cheer or make noise, and during more than outburst turned around to quiet the attendees.

God bless Chris Wallace for being willing to shush the crowd

Many observers felt that Wallace — the first Fox News host to serve as moderator in a general-election debate — did a good job keeping the discussion focused on substantive issue, even throwing in a question about the federal debt, a subject that he noted had not come up during the previous two debates.

But some viewers thought there was a subtle difference in how Wallace handled the two candidates. Here’s a sampling of the reaction:

Quite the difference in how Wallace addresses them. To HRC: some tough policy qs. To DJT: a summer-school teacher with a kid high on glue.

Recognition where it’s due: It took Fox News’ Chris Wallace to #AskaboutAbortion. Thank you, Chris. #debatenight

YES I LOVE THAT WE ARE GETTING INTO REAL ISSUES EVEN UNCOMFORTABLE ONES??–️#debates

Chris Wallace is much worse than I anticipated. https://t.co/mHMzthTdz5

Can Chris Wallace moderate every debate from now until forever, please?