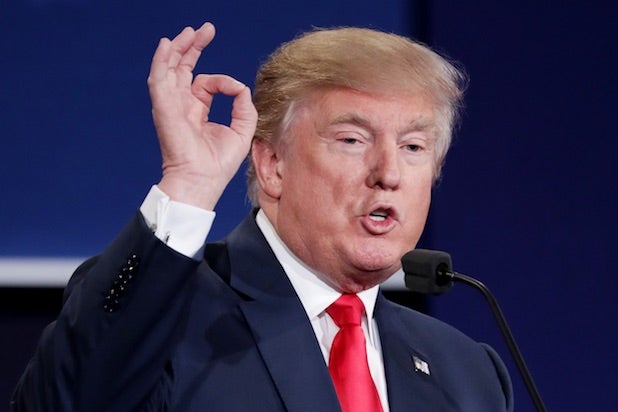 When Donald Trump was losing his second presidential debate, he blamed the refs. He said the debate was “one on three,” because moderators Anderson Cooper and Martha Raddatz seemed aligned against him.

He told Raddatz at one point, “Why don’t you interrupt her?” referring to Hillary Clinton.

In Wednesday’s third and final presidential debate, he got along much better with Fox News moderator Chris Wallace. When it ended, a smiling Trump shook Wallace’s hand and lingered to talk with him. (Trump and Clinton skipped a handshake.)

Even at a tense moment during the debate when Wallace pressed Trump on whether he would accept the results of the election, and Trump went on a tirade against the “dishonest” media, he didn’t include Wallace among the targets of his criticism.

Did Trump decide his past fights with the moderators were misguided? Or was Wallace more fair than Cooper and Raddatz? Whatever the case, Trump will have a harder time arguing that Wallace treated him unfairly.

Here are four other times during the debate when Trump and Wallace got along just fine.

Wallace asked Clinton: “Secretary Clinton, I want to clear up your position on this issue because in a speech you gave to a Brazilian bank, for which you were paid $225,000. We’ve learned from the Wikileaks that you said this, and I want to quote, ‘My dream is a hemispheric market with open trade and open borders,’ so that is the question.”

Clinton clarified that she was talking about energy, and blamed Russian hackers for the leaks, which led to one of Trump’s stronger lines of the night: “That was a great pivot off of the fact that she wants open borders, OK?”

Wallace asked Trump, “Secretary Clinton, I want to pursue your plan because in many ways, it is similar to the Obama stimulus plan in 2009, which has led to the slowest GDP growth since 1949.”

You can read all about the candidates’ puppet debate, in which they accused each other of being puppets, right here. It evolved into a fight about Russian leader Vladimir Putin.

The puppet debate ended. Trump let him ask the question.

When Wallace accused Trump of inaccuracies, including about the slaughter in the Syrian city of Aleppo, Trump trained his attacks on Clinton, rather than on Wallace.

“And they are being slaughtered. Because of bad decisions,” he said, pointing a finger at Clinton.