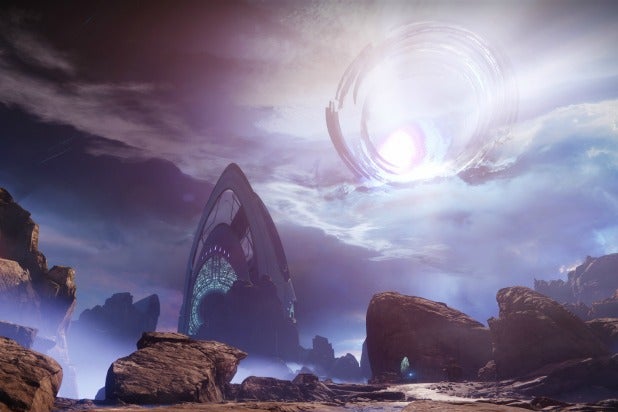 (Major spoilers for all of “Destiny 2: Forsaken” here.)

In a lot of ways, the new expansion for “Destiny 2,” “Forsaken,” feels a lot like “The Hobbit.” It tells its own story, sure, but it also feels like setup for a much larger story that will follow it. It’s a pretty small-scale tale, in contrast to the sort of universe-threatening plots we usually get with these games, and in the big picture of the “Destiny” franchise there are definitely bigger fish to fry on the horizon.

And “Forsaken” definitely teases some of those things, setting events in motion that aren’t immediately clear. What we don’t know right now is what’s going to happen next — but what we do know is who is going to be involved in whatever is coming.

Though the stories told in “Destiny” and “Destiny 2” are usually rightfully mocked for their incoherence, the games feature plenty of interesting lore stuff on the periphery that really pulls it all together. And “Destiny 2” has, since it launched last year, been teasing two characters who were big in the backstory of the “Taken King” expansion from the first “Destiny”: Savathun, who is one of Oryx’s sisters, and Quria, Blade Transform, a Vex that was created to kill Oryx in the distant past which was then itself Taken by him.

And now, with the first completion of the “Forsaken” raid, dubbed The Last Wish, “Destiny 2” is now teasing the possible appearance of Xivu Arath, Oryx’s other sister, as well.

Also Read: Here's What the Hell Happened at the End of 'Destiny 2: Forsaken'

Savathun, Quria and Xivu Arath still haven’t shown up in “Destiny 2,” but we’re definitely moving in that direction with “Forsaken.” Slowly but surely.

The big link here is Riven, a character who was introduced at the very end of the “Forsaken” campaign, and who is the big boss of the raid. Riven is an Ahamkara, a sort of space dragon that grants wishes. Riven was the pet of Queen Mara Sov of the Reef, the missing sister of Uldren Sov, the main antagonist of the “Forsaken” story campaign.

Everything that happened in “Forsaken” was Riven’s doing, as he manipulated Uldren into opening the portal to the Dreaming City. That weird tentacle monster in the last mission was the Voice of Riven.

When you travel to the Dreaming City for the first time in “Forsaken,” Petra is able to use something called the Oracle Engine to contact Mara Sov wherever she is, and they discuss how Uldren was corrupted by the Taken, and how Riven was Taken when the Taken invaded the Reef, back during the Taken War in “The Taken King.” They also imply that Riven is probably not the one pulling the strings in all this — even Riven has a master.

Also Read: Did You Catch Cayde-6's 'Back to the Future' Joke in 'Destiny 2: Forsaken'?

That master is probably Savathun. We haven’t seen her at any point in “Destiny,” but a couple strikes in vanilla “Destiny 2” teased that she was making moves. The Lake of Shadows strike had us face off against a Taken member of the Red Legion, which didn’t make sense because the Red Legion only showed up after Oryx was killed — and the Taken need a king to be able to add new people to their ranks. Or, perhaps, a queen. At the end of that strike, Ghost mentions how the Books of Sorrow lore items from “Taken King” say that Oryx has sisters who could have stepped in to fill his shoes after players destroyed him back during “The Taken King.”

Another strike, Savathun’s Song, directly mentioned Savathun as doing weird rituals involving sucking the light out of Guardians and creating magic crystals with it, for unknown purposes — although dialogue during the strike suggests all those magic crystals are needed for some big summoning ritual. It could be that, during that strike, players frustrated Savathun’s plans for finding her way into the world of the game.

As “Destiny 2” has gone on, the references to Savathun have flowed steadily. So it stands to reason that if Savathun is now the Taken Queen, she’s the one pulling Riven’s strings, and making new moves in the wake of interference by Guardians.

It’s less clear what Quria’s role is in all this, but its name keeps coming up as well, in the Books of Sorrow and “Destiny 2” and “Forsaken.” The lore suggests that Oryx’s son, Crota, accidentally tore a hole between universes thousands of years ago, which is what allowed the Vex — a time-traveling race of super-smart robots bent on conquering and remaking everything — into our universe. The Vex had trouble comprehending the death-worshiping, weirdo-ritual-having Hive, which no nothing but murder and death as they strive toward perfecting themselves and their race. Oryx and his Taken powers in particular were confusing to the Vex and potentially a major hindrance to their plans, and so they built Quria to sort of figure that out.

Quria’s big moment came when the united Hive, led by Oryx, Savathun and their other sister, Xivu Arath, invaded a series of planets circling a black hole (which was put there by the Traveler) that were inhabited by an alien race called the Harmony. During a battle in which Oryx boarded a large Harmony ship, Quria ambushed him, but ultimately was defeated and Taken. After the battle, Oryx gave Quria to Savathun for study — and secretly left Quria with some amount of free will, in hopes that it would do something surprising while in his sister’s possession.

We don’t know what Savathun learned, though, because after the Hive wiped out the Harmony, she took her portion of the Hive forces and flew into the black hole.

An additional note: as a last-ditch effort to try to save themselves from the Hive, the Harmony consulted with what Oryx referred to as “wish-dragons,” which likely is the Ahamkara.

Also Read: 'Destiny 2': What Do the Ending and Post-Credits Scene Mean?

More recently, Quria’s name popped up in a quest from vanilla “Destiny 2” set after the main story has ended, in which you fight Ir Arok, Tongue of Quria, who is attempting, and failing, to Take more Vex for some unknown purpose — possibly something at odds with what Savathun is planning, since whoever is actually leading the Taken had at the same time already proven to be able to Take people the normal way.

And right now, if you hang out much in the Dreaming City, chances are you’ll run into more of these Taken who are associated with Quria. Some leaked lore items indicate that he’ll start having some kind of direct influence on events at some point in the next year, likely as part of one of the events that are included with the new Annual Pass.

Meanwhile, after the first team of Guardians beat the raid early Saturday morning, it unlocked a new solo mission called Broken Courier in which the player is tasked with retrieving Awoken relics that have been stolen by Hive and Awoken forces. The mission is full of mini-bosses with titles related to Xivu Arath, like an Ogre that is the “Ferocity of Xivu Arath.” And which culminates in a battle with a foe that looks very much like the chimera Voice of Riven from the end of the main “Forsaken” campaign. Except this one is called Xaras, Greed of Xivu Arath.

Xivu Arath, like Savathun, has not been heard from since the Hive’s war with the Harmony. She didn’t do anything as dramatic as flying into a black hole, but she did take off on her own with some Hive forces after the war ended. If Xivu Arath is also commanding Taken forces, well, this seems like a big deal. Two Taken Queens? Troubling.

Also hanging around the dreaming city is a character mentioned heavily in “Destiny” lore as relates to the Hive and the Taken: Toland, the Shattered. Toland was previously thought dead, but it turns out that while his body was destroyed, his spirit or consciousness survives in the Hive’s strange “Ascendant Realm.” In the Dreaming City, players can sometimes cross between dimensions into the Ascendant Realm, where Toland appears as a glowing ball of light, and says a lot of cryptic things about the Dreaming City and the Taken.

Toland studied the Hive and it drove him mad when he was a Guardian, and his presence in the Ascendant Realm in the Dreaming City can’t be a coincidence. He has a huge amount of knowledge about the Hive, the Taken, and the Dreaming City seem like they’ll factor in eventually, even if right now they seem like cryptic tidbits that don’t quite add up to much. If Savathun is on the horizon, though, Toland’s story is likely to come to the forefront as well.

Meanwhile, “Forsaken” also introduced another interesting variable in the form of the Drifter, who brought the new multiplayer mode Gambit to the game. It’s thought that the Drifter is none other than Dredgen Vale, a former disciple of Dredgen Yor — a notoriously cruel Guardian who went rogue a long time ago and did lots of fun murder stuff, before eventually being killed by the student of somebody he’d murdered.

The Drifter now narrates Gambit, so he’s hear to stay for a while, and some Gambit-related lore items indicated that somebody from the Vanguard is monitoring the games in hopes that it will draw out the Shadows of Yor, who are other loyal follows of Dredgen Yor’s cruel philosophy. According to Bungie’s roadmap for the next year, the second event in the Annual Pass will feature the Drifter in a major way, so we’ll probably learn more then.

And we’ve also got some lingering plot things from vanilla “Destiny 2,” like the Fallen House of Dusk and the former Cabal Emperor Calus trying to recruit Guardians for some unknown purpose. Calus supposedly actually met the Darkness and survived, but we still don’t know what exactly that means for his motivations. But fans are expecting that the third big release of this coming year, “Penumbra,” will involve Calus.

We’ll have to wait and see to find out for sure, but it sure seems like the near future of the story of “Destiny 2” will be heavy on this stuff, and we would not be even remotely surprised to see Savathun pop up as the big bad of Year 3’s big expansion or “Destiny 3.”